Hysterical coverage by the ultra-liberal BBC is being used to hype up the non-existent ‘threat’ posed by a fake ‘neo-Nazi organisation’ in order to help it attract angry but inexperienced young nationalists so that they can be thrown into prison as proof that the British state doesn’t just pick on Muslim extremists.

Over the last few years, the main state-sponsored honeytrap organisation in the UK was National Action, but its handlers clearly believe that a new fake group is needed to suck up another wave of foolish young victims who fall for its ugly but defiant sloganising.

Following a sensationalist report by BBC Wales on Sunday, mainstream news outlets are falling over themselves to promote the System Resistance Network as a danger to British society and to cover demands by MPs that it should be banned – which would put everyone associated with it in danger of being imprisoned for many years.

The SNR’s Gab account has not even been updated for four months, but the virtually moribund group has been given huge publicity by BBC Wales Investigates, whose undercover reporter set up a fake social media profile to join the group.

During the months in which he was corresponding with the network, they asked him to carry out acts on their behalf. He was also told to read extremist literature.

‘They talk about smashing the establishment,’ he said. ‘They want me to break the law – to get their name in the headlines – they don’t care who gets hurt.’

They told him to put up posters of the group’s logo – which incorporates the lightning flash symbol used by National Action – and to send pictures to prove that he had done so.

The SNR hit headlines in March when Wales Online reported that the group had claimed responsibility for racist graffiti.

‘Nazi Zone’ was painted on a wall alongside swastikas and posters declared: ‘P*** rape gangs coming to your town soon’.

He said that ‘signs of resistance’ give him hope, adding: ‘It’s like a fire. As long as you’ve got some embers burning all you need is to put some fuel on that fire and it can turn into something big very quickly.’ 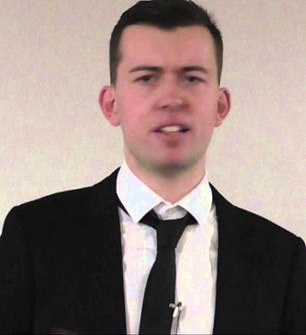 Davies (right) was a student when he set up the group in 2013, urged on by Larry Nunn, an elderly ‘nationalist ideologue’ from Northampton, whose Western Spring group provided the first wave of para-military training for National Action. Interestingly, while some twenty people have been jailed for being involved with National Action, neither Davies nor Nunn have been touched, despite their leading roles.
Since the ban Davies has been arrested on suspicion of continuing to be a member of National Action, which he denies, but he has not been charged.

Stephen Doughty, MP for Cardiff South and Penarth, is now calling for the SNR to be banned just like National Action.  But, in reality, anyone going near the group can – and will – be jailed without any such new ban being necessary.

As well as the extremely dangerous endorsement by Davies, some posts on the SRN Gab account use the word ‘Action’ very prominently. Others have repeated National Action’s endorsement of violence against Members of Parliament.  It is absolutely clear that this would make it simple and easy for anyone associated with the group to be prosecuted on the basis that the SRN is simply National Action under a new name.

Doughty surely knows this, so his ‘ban’ call is part of the trap, put out there in order to make people think that supporting the SRN is ‘at present’ safe. Well, it’s not!

You would have to be extremely naive and ‘green’ to fall for this blatantly obvious provocation and scam, but unfortunately there are a significant number of young, angry and naive youngsters out there. Judas Goats like Davies and Nunn (below left, with megaphone) – who encourage such youngsters to put themselves in the firing line, while walking free themselves – really are the lowest of the low. The aim is clear: To create and then jail more ‘far-right extremists’.

There are several reasons for this: To placate Muslims who believe their community is targeted while others go free; to demonise all opposition to the Great Replacement as violent, moronic, neo-Nazi and dangerous, and to divert resistance to the liberal globalist ‘Project’ down an isolated and futile dead end. It also, of course, gives ‘anti-racists’ grounds to apply for even more grants and donations in order to ‘fight the menace of fascism’, as well as ‘justifying’ the obscene budgets of the incompetent security services. And, every now and then, the liberal media even get to have a go at Brexit for having ‘helped unleash dangerous passions’!

We warned about this State trick when National Action was first formed. We said then that the whole sordid venture, with its deliberately repulsive and spiritually deeply harmful obsession with skulls, would lead those foolish enough to get involved to prison and worse. We were of course proven right about that, and we will be proven right about this latest cynical honeytrap stunt.

Hopefully, this warning will at least save some – please share this article and far and wide and help ensure that it does!