Anti-Lockdown Protests Get Even Bigger

Anti-Lockdown Protests Get Even Bigger

While Joe Biden moves to tighten the masked tyranny of lockdown on Americans, resistance to the 'sanitary dictatorship promoted by the United Nations and its allies is growing all over Europe.

Holland continues to see nightly clashes between an increasingly aggressive police force and residents demanding an end to the unscientific and highly destructive lockdown.

Meanwhile, small-business owners and everyday citizens have been demonstrating across Europe against the re-imposition of strict lockdown measures, with many reopening their businesses despite the rules. 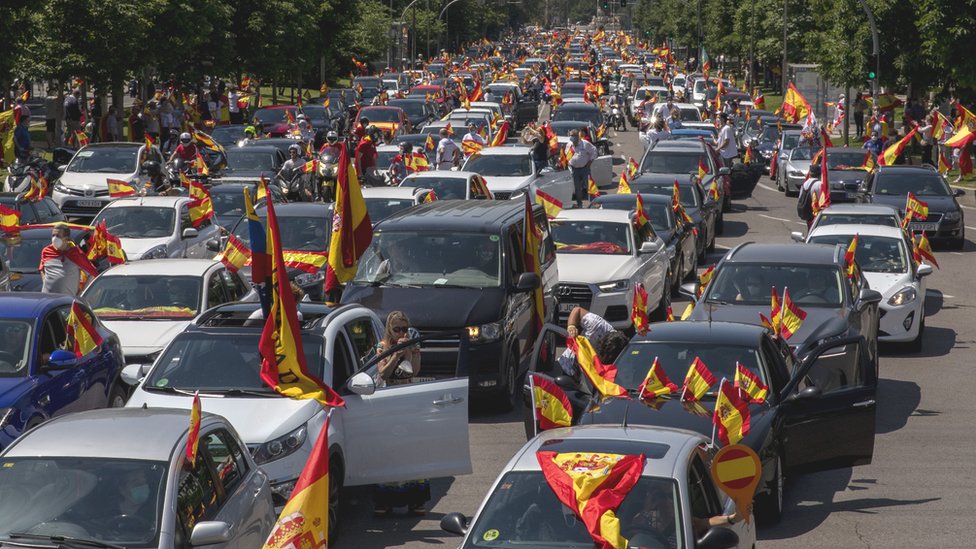 In Madrid, a huge motorcade blocked main streets as thousands marched through the city, protesting Spain’s “health dictatorship” with cries of “liberty, liberty.” Speakers addressed the gathering crowd with messages warning that “there is a plan being forged against the fundamental rights, against liberty, and against life itself.”

Mentioning Event 201, the 2019 pandemic exercise hosted by the Johns Hopkins Center for Health Security, the World Economic Forum, and the Bill and Melinda Gates Foundation, the speaker said that “this plan that they concocted is being executed with the complicity of the main governments around the world.”

“The measures adopted by the government are disproportionate and dangerous for health, and the economy of this country, and are ruining the lives of many families,” the speaker continued.

Speaking of the economic troubles resulting from locking down the country, the speaker said, “There’s been a ferocious, unjustified, and unmeasured attack against tourism, the hotel industry and commerce in general, which is causing unemployment and ruin for hundreds of thousands of Spaniards.”

"These (lockdown) measures have been extremely harmful to our society, causing economic ruin, suicides, mental illness.”

Meanwhile, restaurant and pub owners in the Czech Republic are flouting lockdown to reopen their doors to the public.  Many disgruntled business owners, finding themselves at a loss with the rationale of restrictions and the effect they have wrought on their livelihoods, banded together to establish the Chcipl PES movement, a protest group against the restrictions in the Czech Republic. The group does not deny the risks associated with COVID-19, but warns of the even greater dangers posed by heavy-handed lockdowns.

Jiri Janecek, co-founder of the group who manages a brewery and a restaurant in Jince, Czech Republic, told AFP, “We (the group) have been disappointed with the government for a long time and we want to show that it had chosen the wrong way.”

Another member, Martin Macek, spoke to local press, explaining why he opposes the restrictions. “I joined the protest because I think the government order and what it has been doing to us for the last five months is wrong," he said. "It can be seen that the number of diseases is still rising, while the restaurants have been more or less closed since October.”

More protests are planned in Britain as well. Campaigners are calling for small business owners to take the law into their own hands by holding a 'Great Reopening' on Saturday, January 30th, when British small businesses are being urged to unlock their doors, despite restrictions remaining in place on most “non-essential” businesses such as the hospitality and entertainment sectors.

Satirising the government’s “Stay Home, Protect the NHS, Save Lives” slogan, the “great reopening” group instead is saying: “Remain Outside, Protect the Economy, Save Lives.” The group argue that the lockdown measures actually run contrary to the government’s campaign to save lives, as well as decimating the livelihoods of those dependent on work from closed industries.

Far from being simply a catchy slogan, there is scientific grounds for this argument, including a recent study from Stanford University confirmed that lockdowns have no “clear, significant benefits” in preventing the spread of COVID-19, and may in fact increase infection rates.