The far-left’s ‘Carnival of Resistance’ against Donald Trump’s state visit to London ended today in a total flop.

Organisers had been claiming all week that over 250,000 people would attend. As demonstrators began to arrive in central London, however, they suddenly dropped their ‘expected’ number to just 75,000. And, looking at the pictures coming from the scene, even that seems an over-estimate.

Cowardly Jeremy Corbyn attacked the President of ‘creating a sense of hate’ and fostering racism, but didn’t mention him by name.

Mr Corbyn also sprung to the defence of London Mayor Sadiq Khan one day after he was called a ‘stone cold loser’ by Mr Trump. 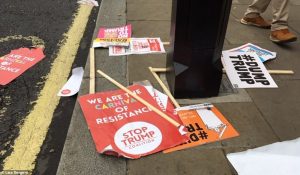 Huge piles of placard produced by the Trotskyite and pro-paedophile Socialist Workers Party for the demonstration were left unused as street cleaners set about clearing up the litter and filth dumped in the streets by the so-called eco-warriors who turned out to attack President Trump for his refusal to worship at the altar of the false gods of man-made global warming.