Breaking News: UKIP leader hints that Tommy Robinson could be moved to prison with Islamists that tried to murder him

Unlike murderers and pedophiles, the state does not offer protection to Patriots that put their personal safety at risk to expose racist grooming gangs operating with near impunity throughout Great Britain.

Now, a tweet from UKIP leader and M.E.P Gerard Batten, has sent alarm bells ringing as Robinson’s family were denied access to visit him.  There are suggestions that Tommy’s safety could be at serious risk.

Mr Batten says that Woodhill Prison is somewhere Tommy Robinson must not be transferred to, as it is home to an ‘Islamic gang’ that tried to murder Tommy and other patriots only a couple of years ago; but rumours suggest his transfer to another prison is imminent. 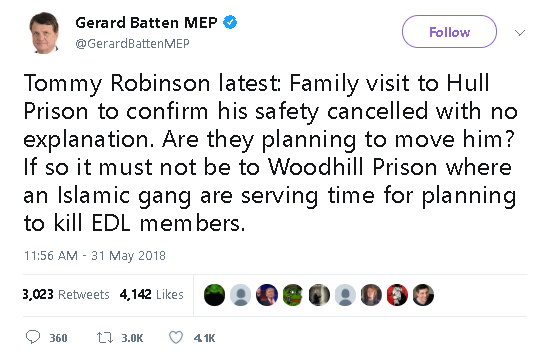 His imprisonment last week drew worldwide attention and resulted in protests outside 10 Downing Street, with half a million people signing a petition for his release.

A media ban prevented details of his arrest and sentencing hearing from being reported in the United Kingdom until the ban was lifted earlier this week.