Establishment In the Dock: Help Save Brexit!

Establishment In the Dock: Help Save Brexit!

After months of shady dealings, backstabbing and betrayal, one British patriot has said "enough is enough," and is dragging the British elites into court to declare Theresa May's Brexit extension null and void and to get us out of the EU once and for all!

English Democrat Chairman and leading barrister Robin Tilbrook has launched a High Court battle claiming that the UK has already left the EU. 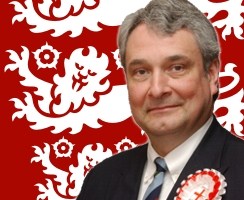 Tilbrook argues that Theresa May did not have the power to extend the exit date past March 29 and that the United Kingdom has officially left the EU.

Mr Tilbrook said: 'What we're hoping to achieve with it is a declaration that we're already out. If you've read it, you can see that the argument's very strong. We've done it all, we started a month or so ago. We've served all the paperwork in advance and we've issued it today. I fully expect it to be heard fairly soon. I've asked the High Court for it to be heard on an expedited basis. I think the argument's strong that we're out.'

Britain has only two options: either Brexiteers and Patriots rally to Mr. Tilbrook's side and support the legal challenge or Theresa May and the corrupt establishment will continue to sell them down the river!

If you wish to help Robin Tilbrook in his battle against the establishment and their big business backers, please click here and please do give generously.

17 MILLION people voted to leave the EU, the biggest exercise in Democracy in the history of Britain, but in the last three years, the elite have done everything in their power to to ignore, derail and overturn the will of the British people.

Britons will never have this opportunity again; it really is now or never!

The future of Britain and Europe is at stake!