The wife of a notorious top Al Qaeda recruiting sergeant gets stopped by police for questioning, sues over her ‘human rights’ and WINS her case, plus massive legal costs which go on YOUR tax bill! The infamous European Court of Human Rights just gave a classic demonstration of why Brits voted for Brexit!

The wife of an Al Qaeda chief had her human rights breached by UK airport police, European judges have just ruled.

Sylvie Beghal, 49, was stopped at East Midlands Airport while returning to Leicester after a visit to her husband Djamel Beghal (below) in a French jail.

The mother of three said she was detained without reasonable suspicion – violating her right to private and family life.

Her claims were rejected by the High Court and Supreme Court but the European Court of Human Rights eventually ruled in her favour.

The Home Office said it is ‘disappointed’ by the ruling, which it has three months to challenge. Ordinary Brits aren’t ‘disappointed’ – they’re FURIOUS!

The airport incident in 2011 had led to Mrs Beghal being charged with failing to help officers – an offence under Schedule 7 of the Terrorism Act 2000.

Tory MP Andrew Bridgen, whose constituency covers the airport, said: ‘It’s sickening. These people are big on human rights but not so much on their responsibilities.

‘We all have a duty to cooperate with the police with regards to terrorism and anyone who doesn’t want to is breaking the bond of loyalty to our country.

‘It’s great she can use the law to protect her own right to family life, but she has strong links with a convicted terrorist and Al Qaeda have not shown any regard to human rights in the past with their victims.’

According to court documents lodged at the ECHR, Mrs Beghal was stopped at the airport after visiting her husband with their children.

Officers said they wanted to talk to her to establish whether she might be ‘a person concerned in the commission, preparation or instigation of acts of terrorism’.

She refused to answer questions until a lawyer was present and after 30 minutes was told she was free to go. But she was later charged under Schedule 7 and pleaded guilty at Leicester Magistrates’ Court in December 2011. 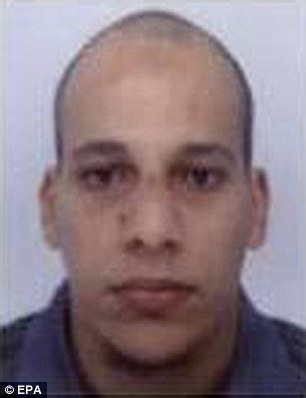 Beghal is said to have radicalised other terrorists while in jail, including Charlie Hebdo killer Cherif Kouachi (pictured)

She then launched a legal action, claiming the powers given to police under Schedule 7 did not have adequate safeguards to be ‘in accordance with’ the European Convention on Human Rights.

Her case reached the ECHR in January 2016, which last week ruled in her favour. Judges told the Government to foot her £21,531 legal bill.

Mrs Beghal has previously claimed her husband, one of Al Qaeda’s top recruiters in Europe, was a victim of French injustice.

He is said to have radicalised other terrorists while in jail, including Charlie Hebdo killer Cherif Kouachi, one of two brothers who murdered 12 during the gun attack on the magazine’s Paris offices in January 2015.

He is also said to have mentored Amedy Coulibaly, who shot a policewoman and four shoppers dead at a kosher supermarket two days after the Hebdo attack.

Algerian-born Beghal settled in France in 1987 and married in 1990. He became a French citizen which allowed the couple to move to Leicester seven years later.

He regularly travelled to London and was allegedly radicalised at the Finsbury Park Mosque under the influence of Abu Hamza and Abu Qatada. He is also said to have flown to Afghanistan to receive orders from Osama Bin Laden.

Beghal was banned from the UK in 2009 after being jailed by the French for a plot to blow up the US embassy in Paris.

His wife is believed to have cost taxpayers more than a quarter of a million pounds in handouts since moving to the UK.

A Home Office spokesman said: ‘We will now consider the implications of this judgment carefully.’