The fake female ‘clergy’ say the tendency to describe God as “he” is a growing problem, some even going so far as to argue that calling God a man is heresy. In doing so they avoid ther inconvenient fact that Jesus Himself consistently and naturally referred to God as His “Father”.

The calls come after a YouGov survey found almost half of 18-24 year old Christians believe God is male, an encouraging increase on the one in three over-65s believing the same. Only one percent of respondents believed God was female.

The so-called Bishop of Gloucester, the Rt Rev Rachel Treweek  Pictured above) said: “I don’t want young girls or young boys to hear us constantly refer to God as ‘he’.”

She said it is important to be “mindful of our language” so as to avoid alienating non-Christians from the Church. Again, she ignores the fact that the language and antics of the feminist coven which has infiltrated the Anglican Church is rapidly alienating its rapidly shrinking body of true Christians.

No wonder that so many are looking with ever greater sympathy at the Orthodoxy Church, which is actually very similar to the Anglo-Saxon Christianity that predated the Norman Conquest.

And the problem is getting worse. The witch-bishop also told the Sunday Telegraph: “For me, particularly in a bigger context, in all things, whether it’s that you go to a website and you see pictures of all-white people, or whether you go to a website and see the use of ‘he’ when we could use God, all of those things are giving subconscious messages to people.

Bishop Treweek became the first female bishop to sit in the house of Lords in 2015 and infamously sent back the initial version of her writ of summons because it referred to her as a “right reverend father in God”. 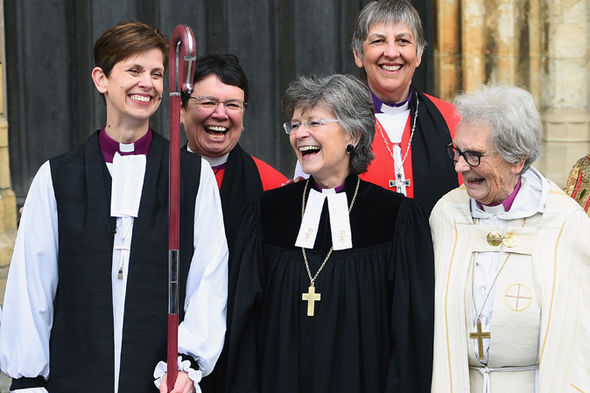 Senior figures in the CoE say there is a growing movement toward femininity (Image: GettyImages)

Rev Wells said: “When I lead prayers or preach, I try to get around the problem by using both male and female imagery, and also by avoiding the need to say ‘his’ or ‘him’ too often.”

But the Rev Sally Hitchener, Anglican chaplain at Brunel University, said it is “heretical” to say God is only male.

Rev Hitchener said: “No academic theologian in the UK would objectively say that God is male, and yet that is common parlance in a lot of the Church and definitely the message coming across in lots of the media communications that we’re sending out there.”

According to Rev Hitchener, a movement is growing within the Church featuring events organised to “emphasise the feminine nature of God”.

Anyone got a box of matches and a pile of firewood?