Former Addicts Show It Can Be Done

Former Addicts Show It Can Be Done

Married former meth addicts have shared unbelievable before-and-after pictures to celebrate their ongoing recovery, with the help of a Christian rehab operation.

Brent Walker, 30, and Ashley Walker, 32, have been married for three years and are enjoying a happy life after deciding to quit drugs together back in December 2016, just days before they tied the knot.

The couple, from East Cleveland, Tennessee, are now helping to lift the lid on the stark reality of meth addiction by sharing dramatic before-and-after photos of how they have transformed since starting their recovery less than three years ago.

Before: Brent Walker shared a photo from December 2016 with his now-wife Ashley from their drug addicted past to help inspire other struggling addicts. Pictured at top – how they are now/

The couple shared one image from November 2016, when they were both still using, and a second from July 2019, while revealing that on New Years Eve 2019, they will have been sober for three years.

‘I hope that my transformation can encourage [an] addict somewhere! It is possible to recover,’ Brent wrote on the now-viral post, which has been shared 142,000 times on Facebook. 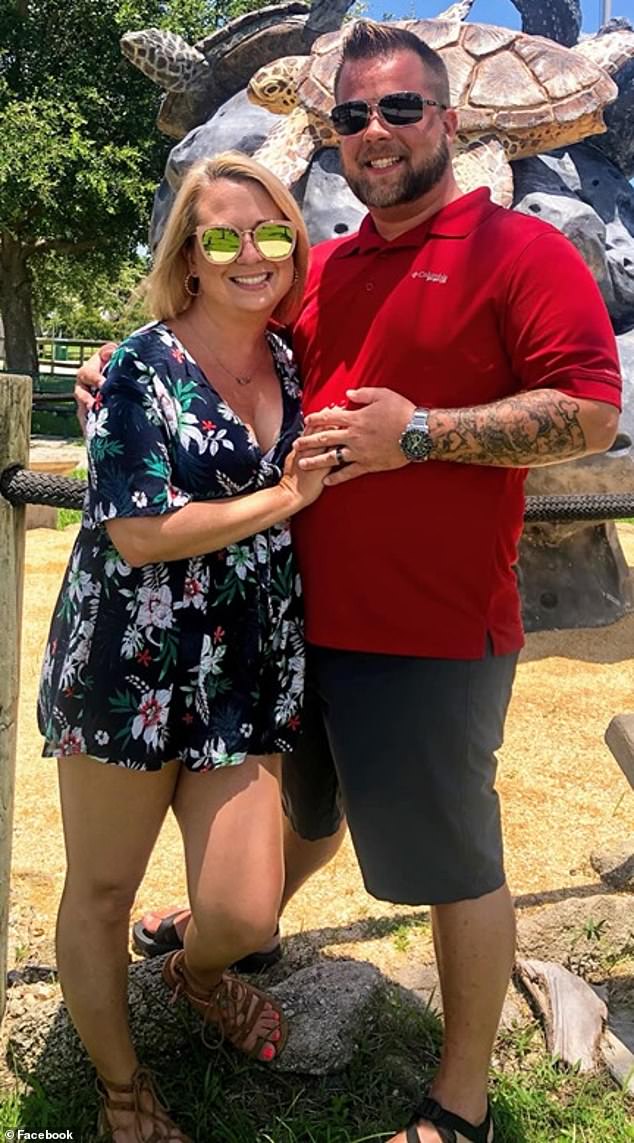 Brent, who started experimenting with drugs at 12-years-old, said over 100 struggling addicts have since reached out to him.

‘I have had a lot of people message me saying that our story inspired them to check into an inpatient rehab to get help,’ he said.

‘I am overwhelmed, it’s just a huge blessing knowing that out story has helped someone help get sober and hopefully share their testimony one day and help another also.’

Brent and Ashley both started injecting methamphetamine at around age 20, and met each other in 2012 when Brent began to sell drugs to his future wife.

After a tumultuous relationship and Brent being incarcerated for two years, the couple made a life-changing decision to quit drugs together and forever, and married a month later, on January 31, 2017.

While we were hooked on meth it was impossible for us to have a stable relationship,’ Brent said. ‘We saw each other from time to time but I felt like I wanted to be independent, to hang out and sleep with whoever I wanted to.’

‘After I got out of prison we decided that we would quit together, and it worked.’

‘I had tried many times to quit on my own and always failed. But with Ashley we help each other, if I have a bad moment she helps me calm down and get the thought of the drug out of my mind.’

‘We still experience cravings, but after the first year of being clean everything gets easier. I have even managed to quit smoking which I had been doing since I was nine,’ he added.

However, now when Brent or Ashley are tempted to turn to drugs, they call someone from their Christian rehab, Celebrate Recovery,

‘We also have a lot less paranoia and a lot less arguments, we are closer to our friends and we are just enjoying life a lot more.’

The couple just returned from a two-week vacation to Florida, something they never thought possible during their addiction days.

Priorities: The happy and healthy couple, pictured in summer 2019, are now striving towards saving for a deposit on a home and regaining custody of Ashley’s kids

Now and then: The couple have inspired others after sharing their road to recovery, pictured right in July 2019 and left in 2017

Life: Brent, pictured with Ashley in November 2018 , began using drugs at 12-years-old and said he could never imagine going down that route again after finally getting clean

‘I remember telling my friends that I will never live the sober life – it was so boring, I couldn’t see how people could live sober,’ Brent told Inside Edition. ‘And now that I’ve seen it, I know 100 per cent I would never use again.’

Brent told BBC that the couple lost custody of the five children they had between them during their turbulent drug-fueled years. While Ashley had gone to rehab at one stage, she relapsed, and Brent continued to go in and out of prison on dealing and possession charges.

Milestones: On New Year’s Eve 2019, the couple will reach their three-years of sobriety mark, Brent is pictured with his two-year medal

Now, they are actively working towards regaining custody of Ashley’s two kids (Brent also has three kids from a previous relationship). They are focused on fixing their credit score and saving enough money for a down payment on a home.

The couple spent two months sleeping on the floors of friends’ homes getting back on their feet when they quit using.

At time time, Brent was a manager at a car wash and Ashley worked in a local factory.

Brent has since found work as a steelworker and as a heating/air conditioning worker, working about 60-70 hours a week between the two jobs.

‘I work in the ICU at a hospital, and I see overdoses coming in constantly, or people going through withdrawals, and it really breaks my heart knowing that I’m on this side, and knowing they can have a better life,’ Ashley said.

Brent told Knox News that he got his GED (General Education Diploma) last year and that Ashley plans to become a registered nurse as she wants to help mothers with drug addictions.

‘It’s not an easy road. It’s a very hard road. But once you get past your year mark, it’s been like blessing after blessing, and happiness all the time,’ Brent said.