You may think that the slogan 'Get Woke, Go Broke' is conservative wishful thinking. That's certainly what the liberals want you to believe, because they like businesses to be scared of THEIR boycotts and greedy for 'pink pounds' and 'gay dollars'. The last thing they want is for Christians and conservatives to become aware of the enormous weight of our purchasing power - and starting to use it properly.

So if you've sometimes felt that it's not worthwhile boycotting some big corporation which is promoting anti-Christian, anti-white, Wokery,take a look at some examples - from Britain and the USA - of how our buying decisions and campaigns really hit these people where it hurts:

When Piers Morgan accused Meghan Markle of telling lies in that Oprah Winfrey interview, his TV show Good Morning Britain was riding high in the ratings.

But faced with 57,000 complaints to Ofcom plus an angry missive from the Duchess, the broadcaster's chief executive Carolyn McCall decided that Morgan should go. He resigned the following day.

Piers Morgan's last appearance in March beat BBC Breakfast for the first time with 1.29 million viewers. Three months, there were a mere 451,000, a slump of 65 per cent. For ITV, that's a costly fall.

Advertisers pay broadcasters a set amount per thousand viewers of the channel. The amount varies, but it's typically around £10,000 per million viewers of each 30 second advert. If losing Morgan cost them 830,000 viewers, then that equates to something in the ballpark of £8,300 for every single slot.

A square-jawed Alpha male being pecked on the cheek by his girlfriend after his shave used to represent what Gillette dubbed 'the best a man can get'.

But in 2019, this time-honoured slogan, which had helped the razor firm establish global market dominance, was ditched.

In its place came a woke alternative: 'The best men can be.' It was launched via a preachy ad featuring boorish chaps harassing women, 'mansplaining' to work colleagues, and bullying their peers. 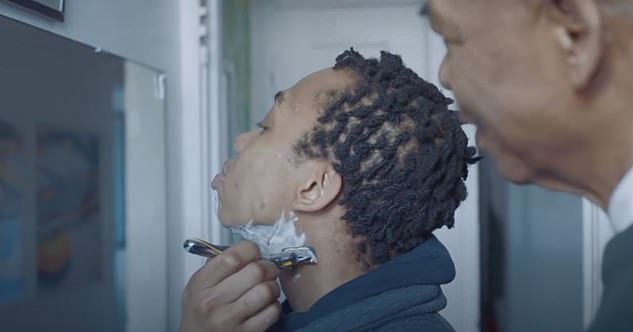 Despite widespread complaints about this feminist propaganda, Gillette launched a follow-up, in which an African-American father taught his transgender child to shave.

Six months later, parent company Procter & Gamble published its financial results. Cratering sales of the brand's razors had forced it to write down Gillette's value by an astonishing $8 billion (£5.6 billion).

They called it the 'Woke Oscars,' in which candidates for Best Picture sought to force a powerful social message on viewers, while actors used their acceptance speeches to lecture us about police brutality and racial justice.

But to the public — who crave glamour, escapism and entertainment — this year's Academy Awards were unrelentingly dull.

A mere 9.85 million Americans bothered to tune into the ceremony. That's roughly half the number who watched in 2020, and a sixth of the total the event managed in 1998.

Remakes of Ghostbusters and Ocean's 11 featuring all-women leads have been commercial flops, while the latest offering in the Star Wars saga — in which Luke Skywalker and Han Solo were largely left out, with the starring role handed to a woman in the shape of Daisy Ridley — made about 30 per cent less than its predecessor The Last Jedi, and less than half the amount of 2015's The Force Awakens.

When is a student not a student? When they attend the University of Leicester, where the authorities last year rebranded undergraduates 'citizens of change'.

A patronising TV advertisement targets potential students with the pitch: 'From tackling social inequality to getting everyone to smile more. It doesn't matter if it's big or small, make the change that matters to you!'

More recently, staff in the English department were told of plans to drop Geoffrey Chaucer and other great writers in order to create a curriculum devoted to 'diversity'.

In place of 'unfashionable' texts like Beowulf, Milton's Paradise Lost and Sir Gawain And The Green Knight, literature degrees will involve 'modules on race, ethnicity, sexuality and diversity, a decolonised curriculum, and new employability modules'.

But is it what students want?

A decade ago, Leicester consistently came in the league-table top 20. Today it is ranked 77th out of the UK's 121 universities, according to the most recent Guardian league table. Student numbers have also fallen — from 23,000 a decade ago to 18,000.

With full-time students paying £9,000-a-year, the university has lost £45 million a year.

Volunteers at stately homes have been forced to wear LGBT 'pride' ribbons. Easter egg hunts have been renamed 'Cadbury's egg hunts'. Leaked internal documents have attacked the very idea of a country house as an 'outdated mansion experience'.

On its website, a section devoted to its 'cause' carries items about planting trees and a 'climate change hazard map', but not a mention of preserving historic buildings. Its 'strategy for 2025' trumpets a 'commitment to diversity and inclusion and playing our part to create a fair, equal society, free from discrimination' but neglects to mention the organisation's houses, gardens, or works of art.

The greatest controversies have, however, been about race. Last year, during the Black Lives Matter protests, the Trust invited ten-year-old children to visit its properties and lecture staff about links to the slave trade.

Then it hired a Left-wing academic to publish a report detailing 'histories of colonialism and slavery' of its 300-odd properties. It blacklisted some 93 properties, including the former homes of Winston Churchill, Rudyard Kipling and William Wordsworth.

Trust members responded by voting with their feet. The charity boasted more than 5.9 million members last February, according to its annual report. Today, its website claims 'more than 5.6 million,' while a recent article in the Spectator said it was 'falling towards five million despite 25 per cent discounts' on fees.

The Trust has been forced to make 1,200 staff redundant, including a quarter of its curators.

A further victim has been the man who presided over the wokery — the charity's chairman, Tim Parker. Last month, a group representing disgruntled members called Restore Trust said it was tabling a motion at the coming AGM calling for his departure. He promptly resigned.

Seeking to tick politically correct boxes in the wake of the Black Lives Matter protests, Goodyear last year sent its blue-collar workforce off for diversity training.

Unfortunately for the global tyre giant, an employee from one of its factories in the U.S. state of Kansas photographed a presentation revealing company rules about wearing political attire at work.

President Trump responded by urging his supporters to boycott the firm. Meanwhile its chief executive issued a grovelling apology.

The following morning, Goodyear shares lost 3.8 per cent of their value, wiping nearly £140 million off its value. When its next trading update came, it emerged that sales in the Americas had dropped 21 per cent, resulting in an operating loss for the region of £130 million.

The lesson is clear: If you see a business going woke, find an alternative that doesn't. Tell both companies what you've done and why. And tell everyone you know to do the same. Your spending power is, quite literally, just that! So use it!