We’ve all known it for years, but here’s the PROOF – search engine giant GOOGLE is heavily and undemocratically biased towards the Left!

The hugely powerful operation’s bias towards leftist media outlets has been laid bare by an algorithm which detected that it favours sites including CNN and The New York Times over others.

According to data compiled by researchers from Northwestern University, the search engine promoted those sites over others repeatedly in the sample month of November 2017.

Just as with the problem of Facebook censorship and deplatforming attacks on conservatives, President Trump knows all about it. Why he just keeps on complaining, rather than using anti-trust laws to do something about it, is an ever more frustrating mystery to us all.

Of the 6,302 articles that appeared in Google’s ‘top stories’ page that month after a term was searched, more than 10 percent were by CNN.

The New York Times was the second most favoured and accounted for 6.5 percent of articles. The Washington Post was third with 5.6 percent.

By contrast, Fox News, the most right-wing outlet in mainstream media, was the source of just three percent of the stories which appeared.

Nearly all (86 percent) of the stories came from just 20 sources and of them, 62 percent were considered to be left-leaning.

The research sheds new light on the unprecedented power the search engine has in influencing the external traffic to news sites, a hot topic in the worlds of media and politics given Facebook’s recently reduced output.

For example, the researchers found that CNN got a 24 percent bump in traffic as a result of having its stories featured in the ‘Top Stories’ box.

For some stories there was a shortage of sources but a search for Rex Tillerson, the former Secretary of State, turfed up stories from 38 sources.

Despite the plethora of sources, 75 percent of the promoted stories about Tillerson came from The New York Times and CNN, the researchers found. 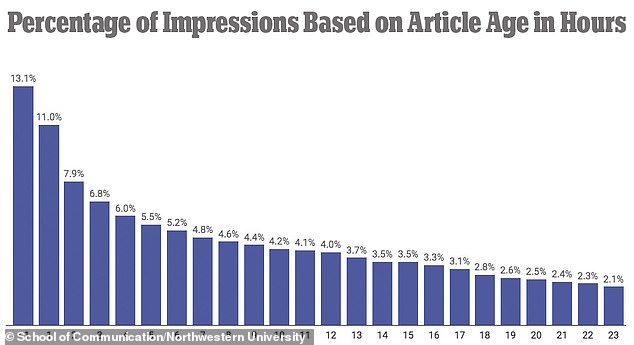 The data also revealed that while left-leaning sites produced more articles on any given subject (2.2 times as many as those on the right), Google’s Top Stories selection seemed to inflate the difference.

‘In Google Top Stories, that ratio was 3.2, indicating that the curation algorithm was slightly magnifying the left-leaning skew,’  Nicholas Diakopoulos, one of the two researchers, writes in The Columbia Journalism Review.

The issue of search engine and social media bias towards media has long been a source of contention in the news industry but it became a mainstream point of concern during the 2016 election when Facebook banned right-wing media outlets that were favoured by Trump supporters.

And, as we all know, the corporate liberal media assault on free speech has gone into over-drive since then.