Thousands of Islamist extremists have held hate-filled protests all over Pakistan today, in order to pressure judges to uphold a death sentence for a Christian woman convicted of blasphemy.

Asia Bibi, 53, has been on death row since 2010, after being accused of insulting the Prophet Mohammed during an argument over a water bowl in Punjab province.

Protesters in the city of Lahore chanted ‘Hang infidel Asia’ as they paraded through the streets.

Pakistan’s Supreme Court reached a decision on her final appeal on Monday, but their announcement is not expected until next week, potentially due to fear of mob violence.

The delay in their announcement, which has left her family and legal team hopeful of an acquittal, has angered Islamists, who want her to be publicly hanged – making her the first person executed for blasphemy in Pakistan.

The mother-of-five’s first appeal was dismissed by a Lahore High Court in 2014, but the Supreme Court stayed her execution in 2015.

If the three-judge Supreme Court bench uphold the 53-year-old’s conviction, her only recourse will be a direct appeal to the president for clemency. 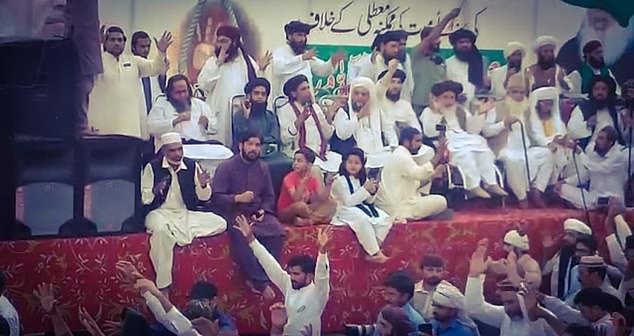 Ms Bibi’s case has outraged Christians worldwide and been a source of division within Pakistan, where two politicians who sought to help her were assassinated, including Punjab governor Salman Taseer, who was shot by his own bodyguard.

Speaking to MailOnline earlier this week, her husband Ashiq Masih said that even if Mrs Bibi is set freed, she and their entire family need to leave Pakistan for their own safety.

‘We believe they will set her free, but the circumstances are such that she would be unable to live in Pakistan as a free woman. She would not survive.’

The allegations against Ms Bibi date back to 2009, when she was working in a field near her home village in Sheikhupura, Punjab and was asked to fetch water.

The Muslim women she was labouring with objected, saying that as a non-Muslim she was unfit to drink from the same water bowl as them.

Mrs Bibi would later say that the women insulted her religion, to which she responded: ‘I believe in my religion and in Jesus Christ, who died on the cross for the sins of mankind. What did your Prophet Mohammed ever do to save mankind?’

This prompted the Muslim women to go to a local imam and accuse her of blasphemy against the Prophet Mohammed.

Before Mrs Bibi could be arrested on any official charges, a violent mob descended on their family home, and beat her up in front of her children.

The abuse was so violent, police were called to the scene, but after rescuing the mother-of-five, they arrested her and threw her in jail – and a year later she was convicted of blasphemy.

She has been held in solitary confinement since her arrest and was told to remain so following her conviction in 2010 for her own safety due to the risk of Muslim prisoners attacking her. 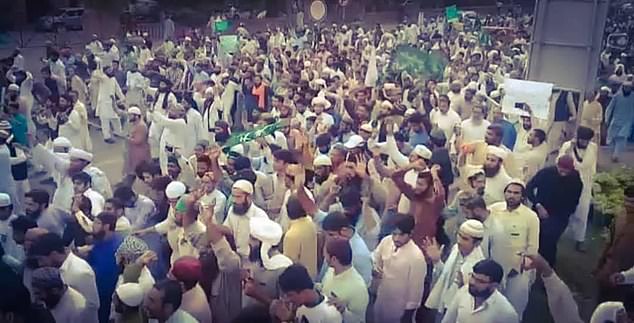 Blasphemy is a charge so sensitive in Pakistan that anyone even accused of insulting Islam risks a violent and bloody death at the hands of vigilantes.

The charge is punishable by a maximum penalty of death under legislation that rights groups say is routinely abused by religious extremists as well as ordinary Pakistanis to settle personal scores.

The law does not define what blasphemy constitutes, and evidence is often not reproduced in court for fear of committing a fresh offence.

Despite this, calls for reform of the blasphemy law have regularly been met with violence and rejected.

Pakistan’s Prime Minister Imran Khan launched a wholehearted defence of the laws during his election campaign earlier this year, vowing his party ‘fully’ supports the legislation and ‘will defend it’.