The establishment parties in most Western countries appear to all be infiltrated by paedophiles, most of them homosexual. When you think about how cucked and destructive most institutions in the West have become, consider that everything from the police to the politicians is chock-full to the brim with sadistic power-hungry homosexuals and that no one can do anything about it anymore.

In fact, the media doesn’t even like to report on it anymore.

A huge paedo ring bust involving a major left-wing Italian party is not international or even national news. .

EIGHTEEN PEOPLE, INCLUDING THE PD MAYOR OF BIBBIANO (REGGIO EMILIA) ANDREA CARLETTI, POLITICIANS, DOCTORS, SOCIAL WORKERS, FREELANCERS, PSYCHOLOGISTS AND PSYCHOTHERAPISTS FROM A NON-PROFIT ORGANIZATION IN TURIN HAVE BEEN REACHED BY PRECAUTIONARY MEASURES BY THE REGGIO EMILIA POLICE OFFICERS. THE SURVEY ‘ANGELS AND DEMONS’ SEES IN THE CENTER THE NETWORK OF SOCIAL SERVICES OF THE VAL D’ENZA, ACCUSED OF HAVING WRITTEN FALSE REPORTS TO REMOVE CHILDREN FROM FAMILIES AND PLACE THEM IN FOSTER CARE PAID BY FRIENDS AND ACQUAINTANCES. ACCORDING TO INVESTIGATORS, THERE ARE ALSO TWO CONFIRMED CASES OF RAPE.

THERE ARE DOZENS OF SUSPECTS IN THE INVESTIGATION COORDINATED BY THE REGGIO EMILIA DEPUTY PROSECUTOR, VALENTINA SALVI. THE ONE RECONSTRUCTED BY THE INVESTIGATORS IS A TURNOVER OF HUNDREDS OF THOUSANDS OF EUROS. AMONG THE ALLEGED CRIMES THERE ARE PROCEDURAL FRAUD, SCREENING, ABUSE OF OFFICE, CHILD MALTREATMENT, VERY SERIOUS INJURIES, FORGERY OF A PUBLIC ACT, PRIVATE VIOLENCE, ATTEMPTED EXTORTION, USE MISUSE

This is just another way of saying that the West is run by sociopathic homos who are part of a transnational Gay Pedo Mafia. In fact, a quick Google search reveals a huge backlog of stories related to previous child trafficking and elite pedo rings stretching back to the early 2000s.

In other words, this is a huge problem facing any country that tolerates sexual deviants and their behavior.

THE INVESTIGATIVE PAPERS TELL OF HOURS AND HOURS OF INTENSE ‘BRAINWASHING’ DURING PSYCHOTHERAPY SESSIONS, CHILDREN ALSO INFLUENCED BY THE USE OF ELECTRICAL IMPULSES, PASSED OFF AS “MEMORIES MACHINE“, A SYSTEM THAT IN REALITY WOULD HAVE “ALTERED THE STATE OF MEMORY NEAR THE JUDICIAL INTERVIEWS”. THESE ARE SOME DISPUTES THAT EMERGE FROM THE INVESTIGATION OF THE VAL D’ENZA SOCIAL SERVICES NETWORK IN THE REGGIO AREA.

To those who may not know: the idea behind MK-Ultra, as far as I understand it, is to program behaviors into people with the use of drugs, shrinks and electric shocks.

One of the main goals is to create schizophrenic people, or more accurately, to get people to develop a dissociative personality disorder. This is talked about in a document spread in the 1980s called the Greenbaum Speech, which is considered to have been the foundation of the “Satanic Panic.” It has been said that the document is a hoax, and no one actually knows for sure.

Real or not, what is written in the document is at least theoretically possible. I found it to be equal parts illuminating and terrifying. Basically, you make people feel sick and you get them to “disassociate” or create alternative personalities to deal with the pain and discomfort that you’re inducing.

This kind of “ritual abuse and mind control” symbolism appears in the #Pizzagate investigation as well. 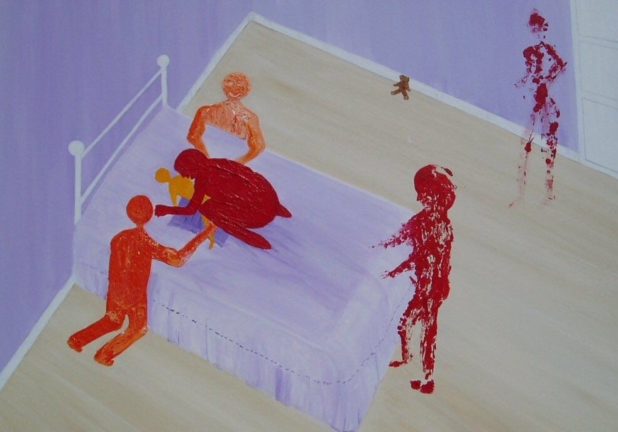 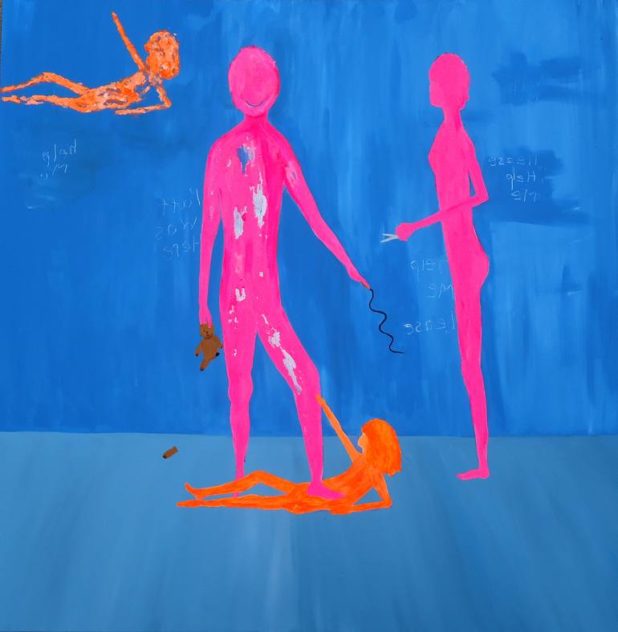 Paintings by Kim Noble, whose art is featured inside Comet Ping Pong. 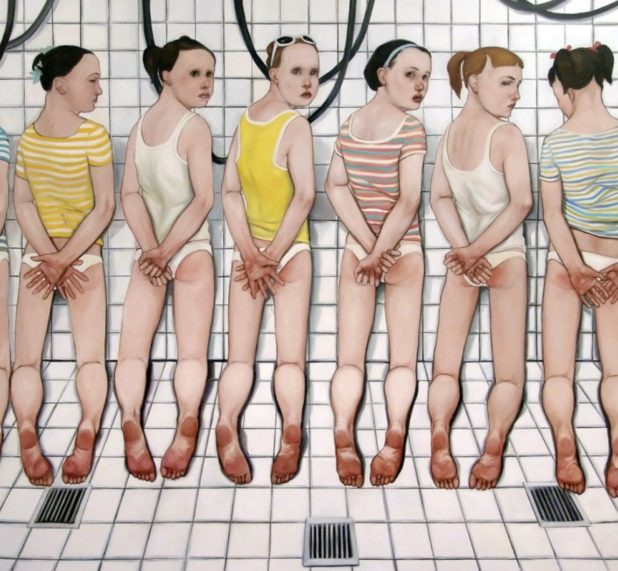 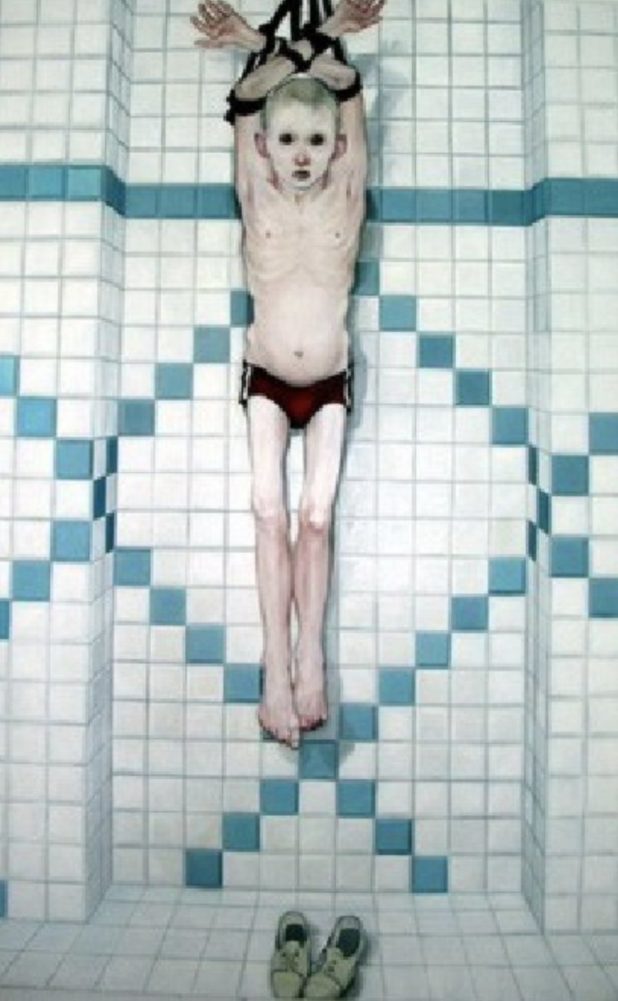 Paintings by Biljana Durdjevic, a favorite of Tony Podesta.

In fact, John and Tony Podesta, who were believed to be at the center of the scandal, collected all types of satanic artwork, much of it depicting ritualistic sexual abuse.

The artist Kim Noble was heavily cited as being extremely weird, and her work was featured inside of Comet Ping Pong – the pizza place from which “Pizzagate” gets its name.

She herself has multiple personality disorder.

This is one of the most important reasons why sexual degenerates must be stigmatized and hunted down by any civilized society and ultimately bogged.

No sane society can continue tolerating this kind of behavior. But at the rate things are going, we are devolving into some sort of Babylonian death cult where all sorts of debauchery are not only tolerated but celebrated.