KTI on the Way to Santiago

KTI on the Way to Santiago

As the third most holy site in all of Christendom, the Shrine of St James in Santiago de Compostela can be reached by a number of ancient pilgrim routes. During a KTI visit last year we mainly followed the northern route, but we took a detour through the dramatic Hermida Gorge to visit the historic town of Potes.

Potes was a stopping point along the old route from the Mediterranean  through Catalonia and through the Picos de European mountains to join up with the northern Camino. Surrounded by snow-capped mountains, the streets of Potes include former pilgrim hostels and reminders that the route is still popular with tourists and pilgrims alike. 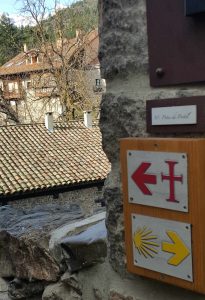 In Potes as in other towns on the various pilgrim caminos in northern Spain, signs set into the cobbles or mounted on walls guide weary travellers to hostels and then on their way.

Although we were there in the middle of winter, Potes itself enjoys a sheltered micro-climate. Sat in the town square overlooking its ancient castle, we were able to shed our jackets and thick pullovers and enjoy a bit of sunshine as we ate plates of Cantabria’s famous bean and pork stew.

Then we had to be on our way, back to the main northern camino and on our way west to the next place we simply had to visit – the even older city of Lugo. 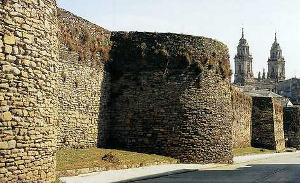 Named after the Celtic god Lugh, Lugo was a prosperous Roman city. By A.D. 300, however, the combination of falling population and barbarian invasion made the old, easy life of the Roman imperial heyday impossible. A massive building programme saw the erection of massive defensive walls around the city, which lies in what is now Galicia.

Remarkably, the walls are still intact to this day. Where Roman chariots could once circle the city, we walked around on top of the walls. Unfortunately, Lugo today is surrounded by a very ugly sprawl of 20th century concrete flats and industrial units, but having the world’s only completely intact set of Roman walls around the old city still makes it worth the visit.

We were lucky enough to be there on a Sunday and to be able to attend the packed service in Lugo’s splendid cathedrals, where a mixture of locals, tourists and foot-sore pilgrims worshipped together, as they have for more than a thousand years. What an experience and what a privilege!

Below: useful video (not of our visit!) which tells you more about the Pilgrims’ Way in northern Spain.