IF California is now twinned with Sodom, Oregon is surely now the modern version of Gomorrah! That;s the only possible realistic conclusion from the latest trans-gender lunacy in Portland public libraries.

A west coast public library “Drag Queen Story Time” has sunk even further than allowing drag queens reading pro-gay and pro-transgender books to kids to permitting children to frolic on the floor and lie on top of a man dressed as a woman.

Photo evidence of children having inappropriate contact with drag queen Carla Rossi at Portland, Oregon’s St. John’s Library last October has just been published on LifeSiteNews. The photos are posted on the Multnomah County Library’s own Flickr account (Note: photos have been removed after LifeSiteNews published this report. The photos can be found here WARNING: Link leads to images of child abuse).

“I wouldn’t let my kids crawl on top of random strangers no matter how said strangers are dressed,” commented Kaeley Triller Harms on Facebook.
At least THESE parents refused to accept the normalization of this filth!

“Even as a day camp counselor 15 years ago, we were pretty carefully trained about not giving kids piggyback rides or letting them sit on our laps,” continued Harms. “And if they asked for hugs, we took the side hug approach.”

Photos posted by the library also reveal toddlers and young boys dressed in feather boas at the event.

Go forth and sin some more!

Not only has the Multnomah County Library system hosted drag queen Rossi multiple times, but the “Sisters of Perpetual Indulgence,” a group of homosexual men dressed up as nuns for the purpose of mocking the Catholic Church, have also presided at Drag Queen Story Time. The event that remains on a PDXPipeline schedule of events for last fall was confirmed by an employee of the Multnomah County library system. 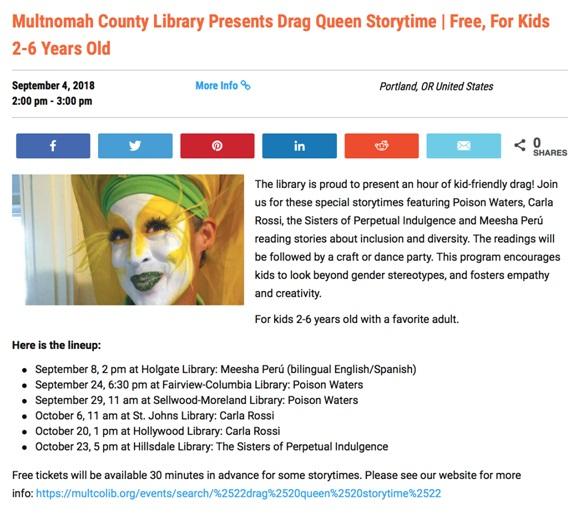 “The men call themselves ‘queer nuns,’ even though the anti-Catholic group is openly devoted to promiscuity,” wrote Fr. Mark Hodges in 2017. “Their slogan is a ridicule of Jesus’ words to the woman caught in sexual sin. Instead of ‘Go, and sin no more,’ the men ‘queers’ have created their trademark slogan as, ‘Go forth and sin some more!’”

And you know the most worrying and disgusting thing of all? Not that homosexual drag queens want to groom, pervert and sodomise little boys – because that’s just what homosexuals most like to do. It’s the fact that some parents actually send their children to such events. Pimping your own children: What can be lower and more deserving of divine retribution?
Do you like this post?
Sign in if you'd like new recruits to be credited to you.
Share
Tweet
Share
Email