A 15-year-old Polish boy is being hailed as a Catholic “hero” after daring to block an LGBT pride march with a raised crucifix and Rosary in his hand.

Jakub Baryła, who describes himself as “Catholic, traditionalist, conservative and patriotic” on Twitter, has become a social media sensation after standing in the path of a 1,000-strong LGBT equality march in the city of Płock on Saturday.

Jesus and the cross stood against evil and sins. Our holy faith commands us to counteract evil deeds.Tweet

Baryła, who is a councilor at Płock Youth Council, said that he decided to block the march with a crucifix after he was inspired by “a similar gesture by Fr. Ignacy Skorupko during the Warsaw battle with the Bolsheviks in 1920.” 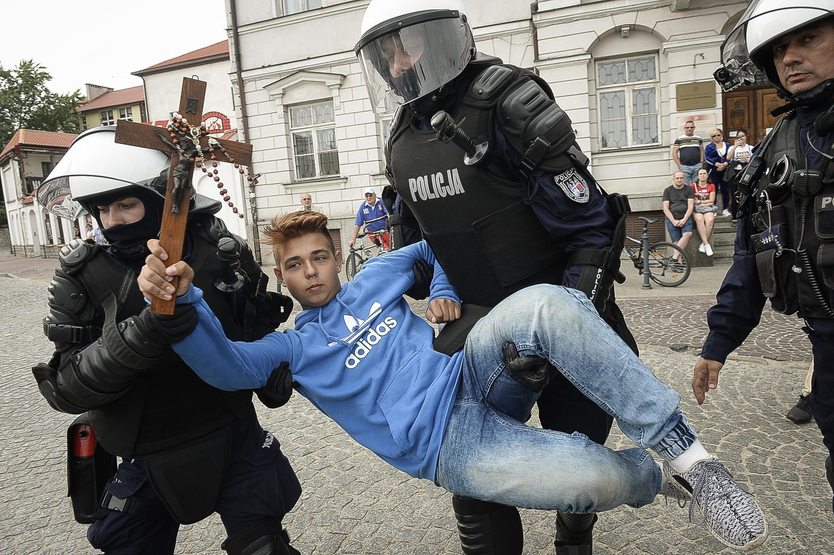 Father Skorupko was a Polish army chaplain who was killed on Aug. 14, 1920, at the Battle of Ossów during the Polish counter-attack. Standing with soldiers leading a charge on the front lines, the priest was holding a cross to encourage Polish soldiers.

Baryła says he initially gave up this idea “because of social consequences. I was afraid of how people would react,” he told the conservative media website wPolityce.pl.

However, he changed his mind and decided to act when he saw a blasphemous icon of Our Lady of Częstochowa with a rainbow halo at the Płock LGBT parade:

I ASKED FOR A CROSS FROM A PRIEST FROM A PŁOCK PARISH. THE PRIEST WAS AFRAID OF ATHEISTS PROFANING THE HOLY CROSS, BUT HE GAVE ME A CRUCIFIX. I WANTED AS MANY PEOPLE AS POSSIBLE TO SEE MY GESTURE. I WANTED TO MAKE THEM REFLECT AND DISCUSS. FIRST, I WALKED WITH A CROSS IN MY HAND IN FRONT OF THE POLICE CORDON PROTECTING THE EQUALITY MARCH.

LATER I SAT ON THE PAVEMENT AND PRAYED IN LATIN WITH THE WORDS SALVE REGINA. I DIRECTED MY PRAYER TO THE MOTHER OF GOD, THE IDEAL OF PURITY. POLICEMEN CAME TO ME AND ASKED ME TO GET OUT OF THE WAY. I SAID I COULDN’T DO IT BECAUSE THE PARTICIPANTS OF THE MARCH ARE DESTROYING MY CATHOLIC FAITH AND PROFANING THE POLISH FLAG BY PLACING A RAINBOW ON IT.

A section of the parade. Note the blasphemous and deeply offensive ‘icon’ and the flag of the Sodomite EU.

While Poland is still a much healthier society than its neighbours to the West, the reaction of its riot police to the stand-off gives grave cause for concern.

Although this video is in Polish, the meaning is obvious, and it includes some powerful material from the 1920 Battle of Warsaw which inspired young Jakub to make his brave and defiant gesture.