It took too long, but Donald Trump finally came to the defence of the Catholic schoolboys who were wrongly crucified by the media for wearing MAGA hats and getting abused by Indian activists: 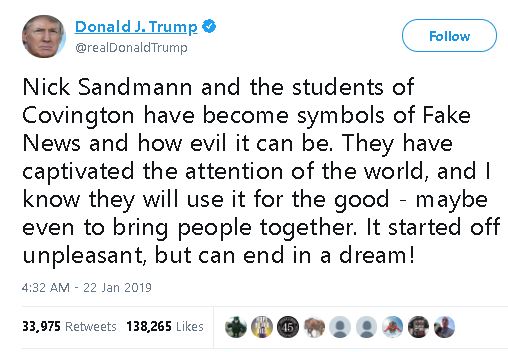 As usual, Tucker called it right, providing an almost lone voice of decency and truth in a mainstream media fake new storm:
Having screamed ‘racism’ with the aid of selectively cropped footage which deliberately hid the truth, the MSM were finally forced to admit that what really happened was VERY different to their fake news tall-tales. Even CNN had to issue a correction of sorts:

With a degree of chutzpah that’s brazen even by their standards, however, they then concocted yet another fake news story in which they blamed the RUSSIANS for the fact that they either couldn’t be bothered to watch the entire footage of the event in the first place, or though that non-one would notice the fact that they had cropped it so slectively as to turn the truth on its head.

The whole sorry episode is now an absolutely classic example of how the liberal Fake News Media do their dirty work. Once  again, congratulations to Tucker Carlson for calling them out, and to Donald Trump for coming to the defence of those poor young lads. Let’s hope he makes a habit of it – how about taking on and defeating liberal Big Tech next, Mr President?