A nightmare vision of a future Britain, still bleeding and burning after decades of brutal civil war between Islamists and the native Brits.

We know that huge numbers of people already understand that this is the way things are going (and not just for the UK), but this remarkable book raises fiction to the level of prophesy.

Not only does it tackle this controversial and vital subject with unflinching courage and honesty, but the author does so in sharp, beautifully written words that move seamlessly from expertly crafted poetic prose to stark, fast-paced action as the all-too believable account of the long struggle of the English Front resistance movement reaches a critical and truly shocking climax.

Everyone who has been waiting for a 21st century version of Jean Raspail’s classic The Camp of the Saints should buy this book. And if you haven’t read that great novel, do yourself a favour and buy and read them both. You certainly won’t regret it! 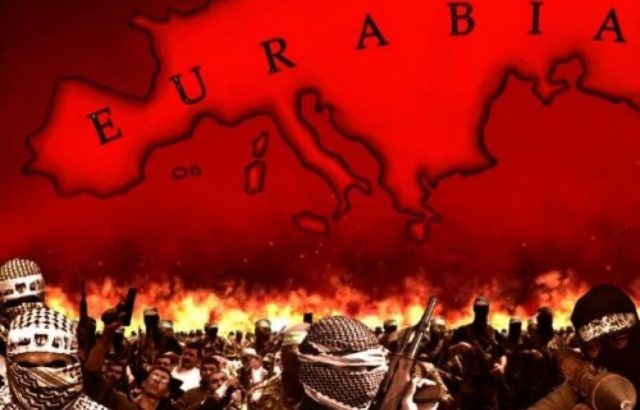 ‘Eurabia’ is the name for the multicultural Superstate to be created by merging the European Union and North Africa, as planned by the European Commission and the French socialist ‘elite’. This nightmare is on its way.

It’s hard to find videos that confirm this, as most of them have been shoved down the YouTube ‘memory hole’ by the liberal censors, but this calm.

Measured, informed response by British conservative columnist Peter Hitchens both confirms the reality of the scheme, and gives a glimpse into its dangers and sheer, insane, unworkability.