Official figures show that Britain’s Muslim population has more than DOUBLED since 2005. The shocking fact emerged in a study by the Pew Research Centre. Reporting on the study’s findings, the Daily Mail noted that: “As of 2016, the UK’s share of Muslims was recorded as 6.3 per cent, around 4.1 million people.” Whoah! Hold it right there!

Because, in July 2005, immediately after the shocking Islamist London terror attacks of 7/7, every single British newspaper – including the Mail – quoted the official figure for Muslims living in Britain as 1.8 million.

So, if that figure was true, it means that their number has exploded, more than doubling in just TWELVE YEARS!

On the other hand, one could note that, while on July 8th 2005 we were told that there were only 1.8 million Muslims in Britain, those with slightly longer memories may remember that, on July 6th 2005, the more commonly quoted figure was three million.

If that was true, and if 4.1 million is also correct, then the real increase is about 33% in 12 years. That increase is pretty much in line with the Pew Research Centre’s prediction that their numbers will triple by 2050.

But it would also mean that, back in 2005, the entire British political and media Establishment told the British people an enormous LIE, knocking more than one third off the real Muslim population figure.

And if that is the case, why on earth should we believe the new figures which, apparently, now show that we have only 4.1 million Muslims? (plus, of course, the illegals who avoid taking part in censuses or other population surveys).

But if the real figure is – as many suspect – already much higher, what does that mean for the population in 2050? 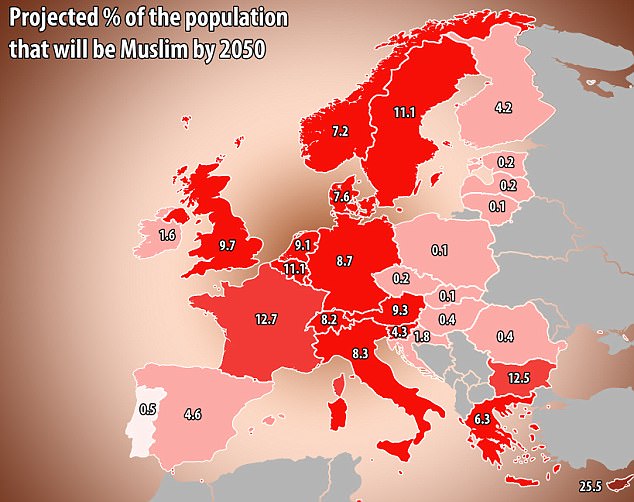 It’s actually going to be FAR worse than this! The Mail’s map uses the Pew Centre’s ‘best case’ figures, based on natural increase alone and the assumption that all further immigration is stopped immediately. Since that will not happen, all the figures on countries marked in red need to be increased by about 80% to show what is really going to happen. And if the Powers That Be are understating the true current figures, it would not be far wrong to TRIPLE them!

As it is, the Pew analysts point out that, due to their younger average age and higher birth rate, Muslim numbers in Britain would rise to 9.7 per cent even if all immigration was stopped tomorrow. While, if it continues at its present level, they predict that the UK Muslim figure will soar to 17.2 per cent by 2050.

So now let’s be realistic. Assume that the real figure right now is 7 million. And triple it – as it will. 21 million Muslims! And remember that many other Western nations, particularly France and Sweden, are even worse.