If you want to see the future of Western nations (the USA and Britain included), Germany provides a casebook study. Which makes this stunning demolition of the official German population statistics so hugely valuable. We believe that the report we reproduce under the video may well be the best and most statistically reliable set of predictions yet produced in any Western state. Sadly, its general picture applies to all of us and not just to Germans.

If you only read one article today, make it this one!

However, our research team has found out that this number is far too optimistic: in 40 years Germany will have a population of 52,6 million people, a considerable 34% drop from the current 81 million inhabitants, and by the end of the century the native German population, the indigenous people without a migration background, will have shrunk even further and be approaching 21,6 million. The explanation that Destatis has mailed us is tantamount to admitting that their projections are unrealistic.

If the German elites succeed in maintaining their population at 80 million, in 2060 the majority of naturalized Germans will have no historical relation to the nation’s ancestors who were once proud subjects of the Holy Roman Empire. Moreover, they will stand in the same relation to Albert Schweitzer, Johann Sebastian Bach, Karl Benz and Friedrich Nietzsche as Recep Tayyip Erdoğan stands to the Byzantine emperors. The excessive numbers of migrants will have altered the German nation forever

By 2050 many of the German historical figures, like Albert Schweitzer mentioned above, will be unmasked as racists and consequently removed from street names and history books and replaced with new heroes, a process that is already taking place in the US and the Netherlands. In the former, monuments to southern generals are under attack, whereas in the latter, migrant parties are pressing for Dutch historical figures to be eradicated from public spaces, streets to be renamed and their most important traditions, which are allegedly not inclusive, oppressive or insulting to national, racial or religious minorities to be prohibited. A country’s history should be about the past deeds of its people, but when people are replaced there is no connection with the past and it may happen that before this century is out, the majority of German citizens will have their cultural roots and their ancestors outside Germany or even outside Europe.

While one may label these predictions as scaremongering, this does not make them unreliable. Demographic forecasts, granting there are no unpredictable changes like outbreaks of epidemics or famine, are remarkably accurate. Consider the comparison of the results obtained by Destatis and us for the zero-migration model.

In Germany, an average woman gives birth to 1.4 children, this is below the replacement fertility level and it has not changed much since the 1970s. This is why the German population began to shrink. The trend has been reversed due to the 1.3 million non EU-immigrants who have arrived in the country since 2015.

Cerberus 2.0 computes the future of the German population

The Gefira team developed Cerberus 2.0, a software program, to calculate how a population grows or declines in the absence of migration. Using only death and birth rates, Cerberus 2.0 can compute what the size of the German society should be without the influx of foreigners and their offspring. The application begins by doing the calculations on the basis of the 1965 census taken from Destatis. We started with the year 1965 because we wanted to measure the German population growth without immigration, and we assumed that in that year there were not that many immigrants. We did not use the official detailed Destatis data for the subsequent years because these included immigrants i.e. the factor we wanted to exclude. While Destatis gives the total numbers of migrants currently living in Germany, Cerberus 2.0 independently computes the development of each age group of the indigenous German population starting with 1965 and ending in 2100, and for all years in between.

We are aware that there are mixed relations and that there are also Germans who have left the country. Because some mixed parents will Germanize their children, while others will do the opposite, we assume that this will not affect our results. Thus, with the aid of Cerberus 2.0 we calculated that if there had been no migration, the German population of 1965 would have been 64,99 million people strong in 2013. This is confirmed by Destatis, which puts the number of Germans without a migration background for the same year at 64.29 million. It shows that our computations are extremely accurate but also that there are hardly any third generation migrants in Germany who are regarded as native Germans.

The Destatis demographic model is a mere fantasy

We also did the calculation for the years 2013-2060, taking the population of 2013 as a starting point, and compared our results with those forecast by Destatis for the same period. According to Destatis, in 2060 the population will be 60.2, while Cerberus 2.0 predicts only 52,6 million inhabitants in Germany. The enormous difference of nearly 8 million between the two forecasts can only be explained by assuming that Destatis is very creative in their demographic forecasting, as we will explain shortly.

For Germany, Cerberus 2.0 processed the death and birth rates provided by Destatis. The demographic data – the percentage of mothers who gave birth, that is the Age-Specific Fertility Rate, and the percentage of people who died – were broken down into age groups. The Age-Specific Fertility Rate for 1965 allowed Cerberus 2.0 to calculate the number of children born in the next year, which is the number of women in a particular age group multiplied by the said rate for the relevant age group. The death rate for the same year was also taken into account. Having calculated the births and deaths, the application increased the ages of each age group by one year to create the entire population of 1966 without the influence of immigration. Then the program began the whole process again to compute the data for the year 1967, the consecutive year, and so on and so forth. For the calculations beyond 2015, Cerberus 2.0 used the age-specific death and fertility rates for 2015.

We then compared the Cerberus 2.0 projections with those of Destatis. Both Destatis and our research team began with the initial population of 2013, which was 81 million, and we both used the same fertility rate of 1.4. Neither took into account the 1.3 million non-Western immigrants that entered Germany after 2014. The obtained results differed significantly: Cerberus 2.0 forecast 52,6 whereas Destatis – 60,2 million inhabitants in Germany in 2060.

Populations grow and shrink due to only four factors; births, deaths, immigration and emigration. The Cerberus 2.0 zero-migration model only uses the death and birth rates, whereas Destatis adds 600.000 young immigrants and removes 600.000 old emigrants every year from its model. That means that every year 600.000 young men and women arrive in Germany, bear children and when those children come of age the parents leave the country like cuckoos, a rather strange assumption. The consequence is that immigrants themselves do not add to the population, but their children do. In the Destatis model the immigration and emigration balance is kept at zero.

How does Destatis arrive at these numbers? In 2014 there were 331 thousand women born. After seven years this same group of women is projected by Destatis to grow to 333 thousand, and after 27 years, in 2041, it is projected to reach a peak of 350 thousand, in other words in 2021 there will be fewer women born than in 2041! How is this possible? Only if immigrant women are included in the statistics.

Since in this model there are as many migrants entering the country as leaving it, the first generation migrants do not add to the total population. However, these migrants have on average 170 thousand children annually. These children enlarge the German population, but Destatis does not regard them as foreigners. Hence, the Destatis zero immigration prognosis is false and yields a far too “rosy” projection for the future of Germany. The response from Destatis on the difference between our findings and theirs is that their projection is formally accurate and the difference is a result of the fact that we assumed a zero migration model – no migration at all, whereas they assumed a balance zero migration model.

Germany, like most of the West, is subjected to mass immigration on an unprecedented scale, and according to the new German government the process will continue for the foreseeable future.

Due to the refugee relocation, the number of the non-EU population increased by 1.3 million between January 2015 and June 2017. The new government has decided that the country should grow by 200 thousand asylum seekers annually. To understand the effect of this policy on German society, one has to compare this number with the number of German newborns. According to Cerberus 2.0, the number of native Germans that are born will decrease from about 450 thousand in 2020 to 315 thousand within the following twenty years. The addition of 200 thousand relatively young asylum seekers year after year, plus their offspring, will alter the German society profoundly within 40 to 60 years and Germany will cease to be a German country.

The 1965 German population will shrink to 37.8 million within the coming forty years, and to 21,6 million by the end of the century. In 2060, the number of indigenous Germans will amount to half of that of East and West Germany combined in 1945. Given the below-replacement birth rates among the indigenous people, the German governments can only keep the current number of inhabitants at 80 million by importing immigrants, thus in the long run, for all practical purposes, replacing indigenous Germans. 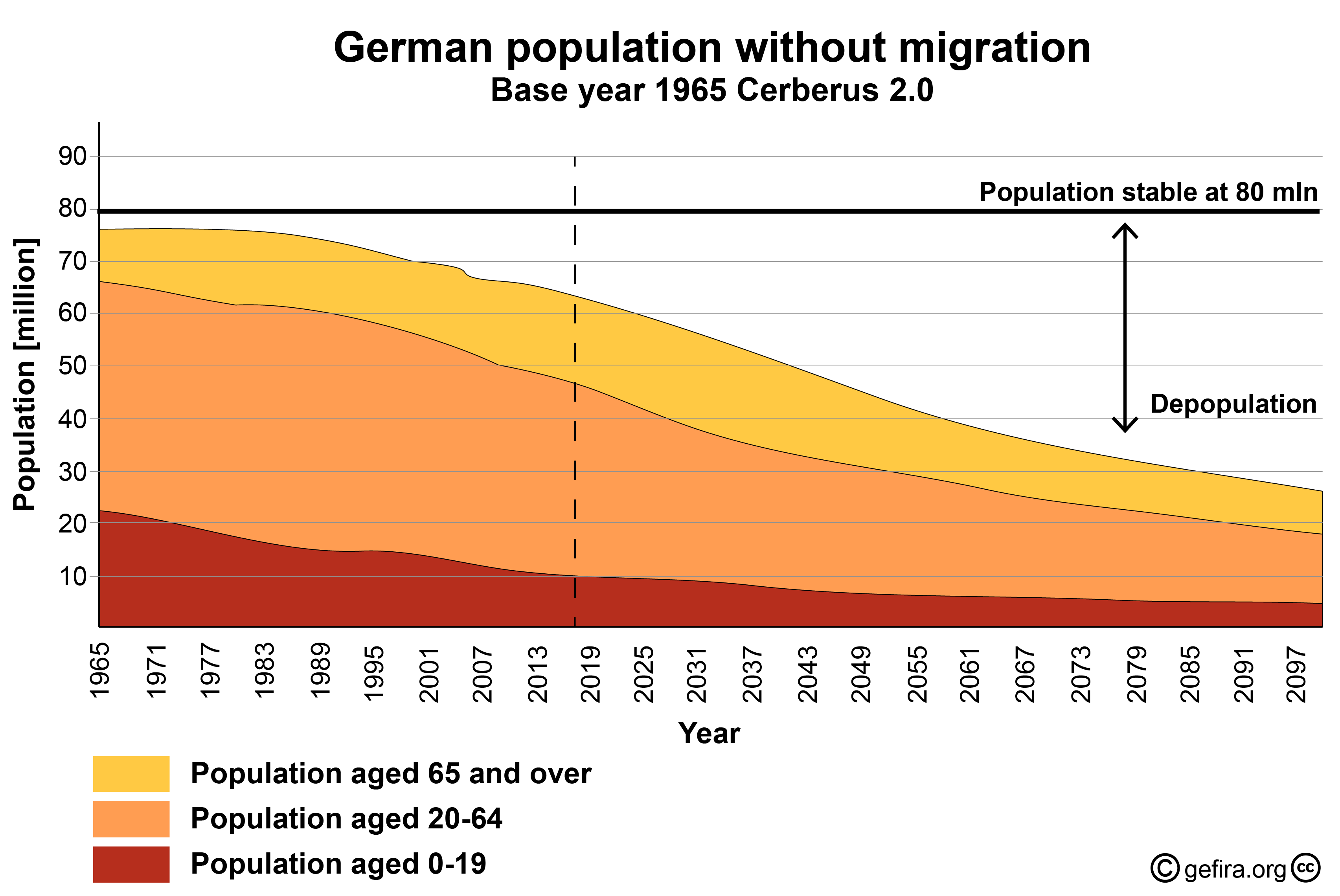 The idea that the new arrivals will integrate or assimilate is complete nonsense i.e. the new Germans are not going to be German. The main reason people relocate to Germany is for personal welfare rather than German culture. Immigrants maintain their religion and heritage, form political parties, build religious institutions, have their separate shops and even want to have their own legal system. Given the sheer numbers that are flocking into Germany, there is no way that the Germans can uphold their political structure, language and cultural identity.

It takes a long time for a super tanker to change course. Similarly, demographic changes are not visible until after at least 15 to 30 years. Accepting 1.3 million foreigners within two years and adding 200 thousand non-European migrants annually to the rapidly shrinking German population will already have had a devastating effect on the German population by 2030.

The results of Cerberus 2.0 show us that the discussion about migration is not about accepting and protecting the right of minorities; rather, it is about an existential question, it is about the preservation of the Germans. When the German ruling elites begin to understand their failing policies, it will be too late. There are no examples in history when these kinds of massive changes have ended well.