Notre Dame And Some Inconvenient Truths

Notre Dame And Some Inconvenient Truths

Political controversy is already swirling around the still warm charred wreckage in the forlorn ruin of Notre Dame Cathedral. ISIS have not claimed responsibility, but have put out online propaganda gloating over the fire.

The liberal MSM are guilty of covering up the fact that large numbers of radicalised young Muslims joined leftists, Satanists and other ‘white’ trash in celebrating the disaster on Facebook and Twitter. And sections of the ‘counter-jihad movement’ are guilty of distributing what is almost certainly a fake video purporting to show Muslims shouting ‘Allahu Akbar’ as the Cathedral blazes in the background.

Let’s get the true facts crystal clear: The entire world – but particularly the Christian West – faces a deadly and continuing threat of terrorism and political-religious aggression from the fundamentalist Wahhabi Islamism that has spread like a cancer through all too many Sunni Muslim communities (including, as it happens, in Paris).

But to blame all Muslims for this, let alone to make and distribute fake videos designed to encourage members of the public to do so, is ignorant, unjust and deeply counter-productive.

Ignorant, because it betrays a total lack of understanding of the reality of the situation, which is that the bulk of the fighting against ISIS and Al Qaeda in Syria has been done by other Muslims – in particular in the Syrian Army and in pro-Iranian militias. 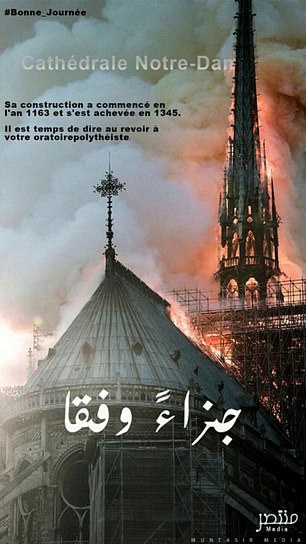 Unjust, because ISIS – and the radical version of Islam from which it springs – did not spring from out of thin air. Instead, they are the product of decades of Saudi Arabian funding of hardline mosques and madrassas all over the world with billions of recycled petro-dollars – with corrupt Western politicians turning a blind eye to the scandal while trousering Saudi gold and business contracts.

As for Al Qaeda – which is now once again an even bigger terror threat than ISIS – it has been actively aided and helped in its war in Syria by a whole slew of wretched Western politicians. The culprits include Obama, Sarkozy, Macron, Cameron, May and Trump.

So the people to blame for radical Islamist violence are the radical Islamists, and the growing number of young Muslims who support them, but also the Western elites who have for various reasons failed so dismally in their duty to stop their Saudi cronies from doing so much to radicalise those young Muslims.

Ignoring these facts and simply blaming all Muslims is counter-productive because it pushes more young ones into the arms of the Wahhabi radicals. And putting out fake videos like the one below simply encourages a vicious cycle of suspicion and hatred.

A shadowy network of ultra-Zionist and US military-industrial complex billionaires are pouring money into the counter-jihad movement in the USA, Britain and much of Europe.

The propagandists they fund speak of ‘defending the West, and ‘our values’, but their values are NOT ours, and they are not worth defending! They are overwhelmingly sickening liberals. Their biggest gripe against Islam is its traditional opposition to homosexuality.

Their second biggest gripe is that most Muslims support traditional families and traditional views of the relationship between men and women. So of course liberal feminists hate and fear them – and want ordinary people to do the same.

We believe that people should indeed fear – and prepare to stand against – the radical Islamism that our corrupt elites are helping to spread its evil tentacles in our midst. But that cause is NOT served by putting out actual fake news designed to stir up hatred against ordinary Muslims. There are no convenient lies, only lies. And we Knights Templar deal only in the truth. Deus Vult!