A Satanist LGBT activist has called for ALL children to be put on puberty blockers until a decision is made as to what gender they are going to be.

Zachary Antolak began as a gay man but now identifies as a lesbian woman named Zinnia Jones and is in a polyamorous relationship with another lesbian named Heather and a ‘trans woman’ named Penny.

What better example of obvious mental stability to decide which chemicals to bombard your children with?

“An inability to offer informed consent or understand the long-term consequences is actually an argument for putting every single cis and trans person on puberty blockers until they acquire that ability,” he added.

It isn’t easy to believe that governments would one day mandate puberty blockers for all children until their teachers and other liberal social engineers have had time to convince them they want to be the opposite sex.

But then, a few years ago, no one would have believed that governments would force schools to allow boys who say they are girls to use private facilities intended for people who really are girls. Now it is mainstream liberal-left policy,including with the fake president Biden regime.

“Only the Devil knows what sick nightmares, hatched in the depraved fantasies of guys like Zinnia, may soon be mandated by the Feds under Democrat rule. Those who aren’t on board will be silenced by 'hate speech' laws. Their children will be confiscated,” warns pro-life activist Dave Blount. 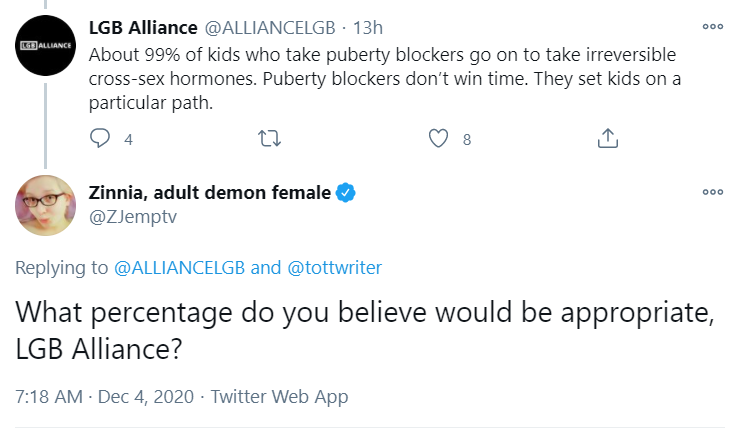 The 'devil' reference is not accidental. 'Zinnia' has taken to calling himself an "adult demon female", as shown here in an exchange with the LGB Alliance, which is a group of lesbians who don't like the idea of young girls becoming fake men instead of lesbians, and who therefore oppose puberty-blockers and trans genital mutilation operations. He also wears an inverted cross, which is a popular symbol among Satanists.