The shocking bias liberals have when it comes to ‘racism’ has just been exposed by a row over a model persecuted and fired after being accused of modelling clothing adorned with the slogan “White Lives Matter“.

During a recent episode of the American reality dating programme, contestant Victoria Fuller was awarded the prize of being featured on the digital cover of Cosmopolitan alongside Bachelor Peter Weber after winning a challenge.

However, in a statement published on the Cosmopolitan website, editor Jessica Pels explained that the publication decided to pull the plug on Fuller’s cover after finding out she had taken part in a controversial modelling campaign.

Pels stated that all she knew of The Bachelor contestants when selecting a winner was “their first names and the energy they conveyed through the camera lens”.

“It wasn’t until a few weeks ago that I found out that the woman I’d chosen had, in her past, modelled in an ad campaign wearing White Lives Matter attire,” she wrote.

Needless to say, if she’d taken part in a “Black Lives Matter” campaign, she would have received nothing but praise and promotion.

The example of disgusting anti-white bias was made even more powerful when it emerged that the “White Lives Matter” campaign wasn’t even about the huge numbers of white Americans abused, discriminated against, victimised, raped and murdered purely for the colour of their skin.

What she modelled for was actually a Marlin Lives Matter organisation focused on preventing white and blue marlin from being overfished, which used ‘white lives matter’ and ‘blue lives matter’ messaging on its promotional shirts and hats. 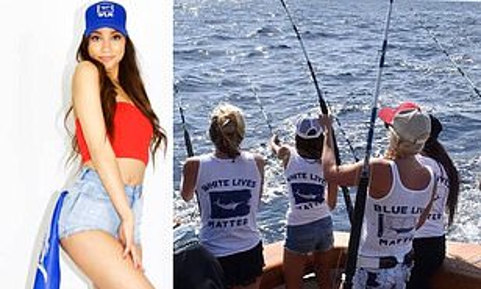 Pels added that the “White Lives Matter” movement “does not reflect the values of the Cosmo brand”.

“We stand in solidarity with Black Lives Matter, and any cause that fights to end injustices for people of colour.” But white people don’t count when it comes to human rights and liberal values. Can you see where this will end yet? If so, what are you going to do about it?