This day six years ago, Drummer Lee Rigby was butchered in the streets by two Islamist thugs while carrying out charity work on behalf of injured veterans.

Hundreds of bikers came from all across the country on Sunday to remember Fusilier Rigby on the sixth anniversary of his death.

They rode from Rochdale Town Hall through Heywood, past Bowlee in Middleton.

The group then paraded with a band to Middleton Memorial Gardens for a service of remembrance.

Event founder Gavin Vitler said: "The ride was a great success and is getting bigger each year. I would like to thank all the volunteers, veterans, army cadets and the members of the public who come out and support us. It is six years since we started the memorial ride and we couldn't put on such a great event without the community support.

"I would also like to thank Rochdale Council and Greater Manchester Police who have supported the ride. The day was full of emotion for the Rigby family and also for the family of Olivia Campbell Hardy, who was killed in the arena bombing. Olivia's mum, Charlotte, was so brave reading all the names of the victims of that day, so on behalf of Charlotte and the Rigby family, thank you."

Four years later, on the same date, the terrorists struck again, only this time their target was children attending an Ariana Grande concert, killing 22 people. 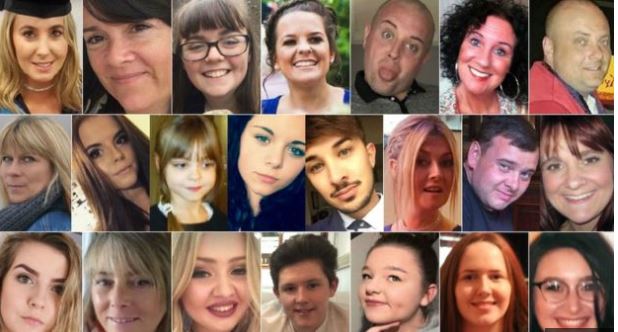 Today, pop stars paid tribute to the victims of the Manchester Arena bombing from the venue's stage, two years on.

Dedicating hit "Stay" to the victims and their families, South Korean pop band Blackpink said their "hearts ache for those who lost their loved ones".

Ariana Grande posted a bee emoji in her Instagram stories, with no words. Her mother Joan Grande said Manchester is "with me always, in my heart and in my mind".

A low-key memorial service is taking place at St Ann's Church for families and emergency services. The church is in St Ann's Square, which became a focal point for tributes immediately after the bombing.

Handmade hearts have been left across the city centre for people to take with them on the anniversary and to "make many people smile". Floral tributes have also been left at St Ann's Square and Manchester Victoria station.