Australian rugby star Israel Folau is facing a ban from the national side for sharing the Biblical condemnation of various forms of immoral behaviour. Criticising drunks, fornicators and adulterers is apparently OK, but pointing out that traditional Christianity tells us that homosexuality is punished in hell has got the sporting superstar into VERY hot water.

Rugby chiefs have have joined an online and liberal media lynchmob to accuse him of homophobic comments and say that they ‘warrant termination of his employment contract’, which is believed to be worth around £1.1million a year.

But Folau has refused to back down, saying it is up to God whether he would carry on playing and insisting he would rather face the end of his career than retract his comments.

The row has also engulfed England’s Billy Vunipola, who ‘liked’ the post on Instagram and later defended the Australian player, remarking that ‘man was made for woman to procreate’. 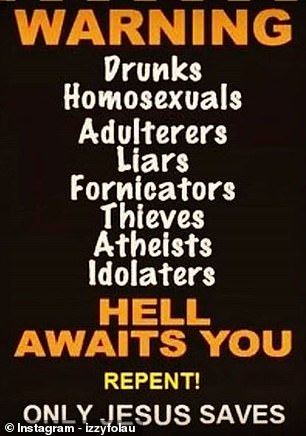 When asked if the fallout has made him reconsider his comments, brave Folau, a devout Christian, replied: ‘Absolutely not. I’ll stand on what the Bible says. I share it with love.’

The affair is just another example of the rapidly growing problem of totalitarian liberal persecution of Bible-true Christians. From rugby stars being sacked to small businessmen being deplatformed online, those holding traditionalist views are already being denied the right to earn a living.

In real life, that means they are already being punished for ‘Ungoodthink’ with the loss of their livelihoods, homes and families. And if they still don’t recant? Prison, violence and murder are the logical next steps……