Dramatic footage for Chemnitz, which has become the epicentre of growing German resistance to the policies of Angela Merkel.

This shows angry local people confronting members of the liberal elite ‘Lying Press’. The journalists clearly expect to be able to browbeat the ‘stupid peasants’, but things turn out VERY differently!

In 1541 Buda was conquered by the Turks in the Siege of Buda, and was under Ottoman rule for the next 145 years. The economic decline of Buda the capital city during the Ottoman conquest characterized by the stagnation of population, the population of Buda was not larger in 1686, than the population of the city two centuries earlier in the 15th century.

The Ottomans allowed the Hungarian royal place to fall into ruins. The amortized palace was later transformed into a gunpowder storage and magazine by the Ottomans, which caused its detonation during the siege in 1686. The original Christian Hungarian population didn’t feel secure during the Ottoman conquest, their numbers significantly shrank in the next decades, due to their fleeing to the Habsburg ruled Royal Hungary. The number of Jews and Gypsy immigrants became dominant during the Ottoman rule in Buda.

Following the Ottoman defeat at the Battle of Vienna in 1683, Holy Roman Emperor Leopold I saw the opportunity for a counterstrike. After the unsuccessful second siege of Vienna by the Turks in 1683, which started the Great Turkish War, an imperial counteroffensive started for the re-conquest of Hungary, so that the Hungarian capital Buda could be freed from the Ottomans. With the aid of Pope Innocent XI, the Holy League was formed on 5 March 1684, with King Jan Sobieski of Poland, Emperor Leopold I and the Republic of Venice agreeing to an alliance against the Turks. Buda was besieged for 108 days and ended in Ottoman victory.

In 1686, two years after the unsuccessful siege of Buda, a renewed campaign was started to take the city. This time the Holy League’s army was much larger, consisting of 65,000-100,000 men, including German, Hungarian, Croat, Dutch, English, Spanish, Czech, Italian, French, Burgundian, Danish and Swedish soldiers, and other Europeans as volunteers, artillerymen and officers. The Turkish defenders consisted of 7,000 men.

By the middle of June 1686 the siege had begun. On July 27 the Holy League’s army started a large-scale attack, which was repulsed with a loss of 5,000 men. A Turkish relief army arrived at Buda in the middle of August led by Grand Vizier Sarı Süleyman Paşa, but the besieged Ottoman forces, led by commander Abdurrahman Abdi Arnavut Pasha, was unable to mount any offensive and he was shortly afterwards killed in action. Abdi Pasha’s defensive efforts are referred to as “heroic” by Tony Jaques in his book “The Dictionary of Battles and Sieges”.

Prince Eugene of Savoy and his dragoons were not directly involved in entering the city but secured the rear of their army against the Turkish relief army, which could not prevent the city from being entered after 143 years in Turkish possession.

When the hate-filled left want to destroy everything connected to the Old South, we wonder how they feel about this classic Joan Baez track? Even though she’s also a leftist, Joan Baez also came from an era when all normal Americans understood that the War Between the States was a tragedy, and that the soldiers of the Confederacy were brave men and victims too.

“But look away look away Dixie I don’t want them to see What they’re doing to my Dixie” This is how we feel with what’s going on now..

And, a bonus just for you, here’s what we think is the best cover ever of this great song…

Posted on Stories by Glen Robertson · September 03, 2018 10:13 AM
The man suspected in the Amsterdam Central Railway Station stabbing that injured two Americans on Friday had a “terrorist motive,” local authorities now admit, citing the suspect’s own statement to police.

“The victims were not chosen deliberately or with a clear reason,” Amsterdam authorities said, as quoted by AP. “The investigation is still underway, and all scenarios remain open for the investigation team.”

The stabbings took place at Amsterdam’s busy Central Station on Friday afternoon. The two victims were identified as being American.

Both victims have serious but not life-threatening injuries, and are expected to fully recover. “We wish them a speedy recovery and are working closely with the City of Amsterdam to provide assistance to them and their families,” Hoekstra said.

The suspected attacker was shot and wounded by police. It is understood that the suspect, who was later identified as an Afghan citizen with a German residency permit, did not know the two victims.

Amsterdam police spokesman Frans Zuiderhoek earlier told AFP that the investigation was “seriously taking into account that there was a terrorist motive.’

The admission about a terrorist motive was promptly reported by RT, but most of the ‘mainstream’ English-language media has kept quiet about this fact.

Oldham Councillors Bow In Prayer – And NOT to JESUS!

There was a time when all local council meetings in Great Britain (and probably in the whole of Europe, for that matter) started with the Lord’s Prayer. But times they are indeed a changin.

This footage was released first about a year ago, but it’s worth reminding yourself what the Labour Party is really all about these days….

By Any Means Necessary (BAMN), the violent leftist “anti-fascist” group linked to Antifa and numerous assaults on conservatives in America, is also tied to NAMBLA, a prominent pro-pedophilia organisation.

According to The Daily Caller, BAMN’s parent organization – the Revolutionary Workers League – “worked directly with the North American Man/Boy Love Association in the years just before it founded BAMN.”

The outlet, citing NAMBLA documents, states a founding member of BAMN is “an admitted member of NAMBLA.”

Those documents were reportedly provided to The Daily Caller by “an anonymous group of researchers” that dubs themselves “the shadowy and/or mysterious organization known as Antifaleaks.”

One of the bulletins provided by “Antifaleaks” reads, “[the Revolutionary Workers League] is supporting of gay rights in general and NAMBLA in particular.”

Most stunning, perhaps, is the fact that the Revolutionary Worker’s League apparently made four proposals at a 1991 NAMBLA conference, which included:

As for the member of BAMN reportedly associated with NAMBLA, that would be Eileen Scheff.

The Daily Caller describes Scheff as BAMN founder and co-chair Shanta Driver’s “former law partner who has represented BAMN on multiple occasions, including at the Supreme Court.”

According to a book titled Bad Girls and Dirty Pictures: The Challenge to Reclaim Feminism,Scheff gave a talk at a NAMBLA press conference in 1992 in which she said, “the current witch-hunt against NAMBLA has nothing to do with protecting children. Denying youth their sexuality will not stop child molestation.”

Even more disturbingly, The Daily Caller reports that Scheff also claimed, “the media and police are targeting NAMBLA because it stands for the rights of young people to have consensual sex with whomever they want.”

“I call on all progressive people in the lesbian/gay community, in the women’s movement, and in the community at large to defend NAMBLA and its right to advocate for consensual sex regardless of age.”

Scheff’s speech reportedly appears in the NAMBLA bulletin provided to The Daily Caller.

BAMN, in case you’re not familiar, is the militant leftist group known for enacting violence against conservatives.

Practical Templarism in Action – The Babies In This Photo Were Saved With YOUR Help!

At least they were if you’re already a member or an active supporter of the Templars! How? Because, for several years now, the Templars have been helping one of Hungary’s most successful Pro-Life organisation raise funds, gather clothing and other practical aid, and arrange adoptions rather than abortions.

Even before that, some of our key members had been involved with the pro-life struggle in Hungary for more than 20 years,

So when our friends in in the Hungarian Pro-life movement this summer gathering of some of the families they have helped find practical ways to avoid abortion, they flew the Templar flag. It’s their way of showing their gratitude to everyone who have helped to make the Knights Templar International the largest Templar organisation in the world – and by far the most effective at providing real, practical help to Christians in real need.

Because, although we do have initiations, regalia and Christian ritual, the KTI is not a dressing up club or a freemasonic business network, We are a militant, practical, muscular Christian Order. Following in the footsteps of our Templar forebears.

This is the moving and inspiration personal story of Imre Téglásy, the Knights Templar International's Grand Prior in Hungary. The video relates Imre's years of struggle, as an abortion survivor himself, to promote the pro-Life message and cause in his native Hungary and beyond. Deus Vult!

The Templars Help Out Again!

British Templars travelled to help provide a day of practical help to a group of Tridentine Catholic nuns in France.

The Sisters run a school which provides a wonderful, but very affordable, traditional education to more than one hundred girls from Belgium, France, Great Britain and Ireland.

The Sisters do a great job on the educational side, and keep their pupils in good order, but by late summer some of the grounds of the school tend to get beyond their control. 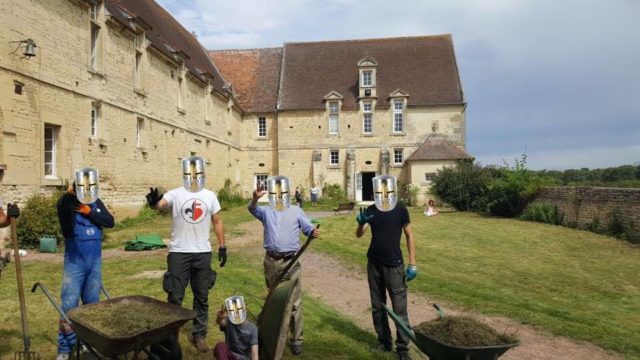 So it was that we found ourselves spending a whole day using brush cutters, lawn mowers, pruning hooks, rakes and mattocks. The sun blazed down, but refreshments and a splendid lunch in the cool of one of the the cellars under the centuries-old building kept us going.

Religious Festival of the Black Nazarene

Thousands of devotees in Manila made their annual procession in honour of a deity they believe to be miraculous.

Mostly male, bare-foot devotees waved white handkerchiefs, when the statue of the Black Nazarene was brought out of its shrine in the Philippines capital on Wednesday.

Unmindful of the risk of stampede, thousands took part in this procession, marking the feast day of Saint John the Baptist Parish, which houses the image.

It was a struggle as everyone in the crowd made an effort to touch the centuries-old statue.

Some were happy to just be able to grab the the rope that leads the image through the procession, but even that was a hard task.

Worshippers said they had come to show appreciation and devotion to the image for prayers that had been answered.

At least 200 policemen were deployed to ensure the safety of those taking part in the procession.

The life-sized statue of the Black Nazarene is believed to have been made by a Mexican sculptor and was brought to the Philippines by a priest in the early 1600s.

Truly shocking video about Google’s latest plans to censor facts that the liberal elite find inconvenient. And, for that matter, the sites that dare talk about them. This is not some whacky ‘conspiracy theory’, this is Orwellian Censorship at it’s very worst.

“Think of it as augmented humanity”, says Goggle’s boss in one of the creepiest and sinister clips of modern times. Watch, and find out a whole lot more!

You’ve got to watch this! And we need you to pass it on as well!

it works, nothing more to see here