The Knights Templar Order’s commitment to building a serious machine in the USA was once again demonstrated last month, with our first conference in one of America’s northern states. A leadership team from the Rosslyn Priory joined with brethren who travelled from all corners of the United States (and also from Canada) for two days of lectures, discussions, prayers and our unique Templar comradeship. 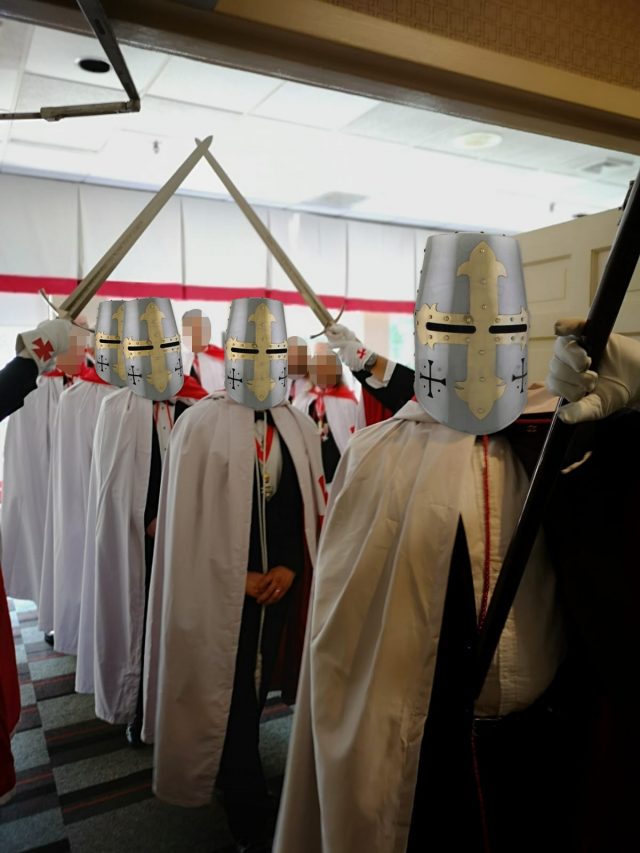 Our venue was a conference hotel among the green and leafy hills on the outskirts of Pittsburgh, Pennsylvania. Guests who arrived early enjoyed informal discussions in a relaxed social atmosphere on Friday evening.

Saturday morning heralded a major change in style and tempo, with all present donning robes and KTI regalia to parade behind our Vexillium banner and the official flag of our Order in the United States, through an arch of swords into the meeting room.

As always, the event’s formal proceedings began with prayers and the National Anthem. The Master of Ceremonies then explained once again the intense time pressures of international commitments that made it necessary to hold the conference over the Independence Day weekend, and thanked all those who had sacrificed family time to join our Pennsylvania Encampment.

Throughout the packed and very varied day, the assembled Sir Knights and Associates enjoyed illustrated lectures from British and Irish brothers on the Deep State origins of the migrant crisis and Islamisation threat in Europe; on Personal Responsibility, and on the dark pagan fantasies underlying the fake news Climate Change hysteria.

A young American veteran then spoke about the current situation in the USA and on the conservative movement’s urgent need for Templar insights, experience and strategic and spiritual guidance.

Both lunch and dinner were provided by very professional external caterers – the only ‘complaint’ being that the food was perhaps too good, and most certainly too tempting and plentiful, for ‘Poor Knights’, especially those needing to watch their waistlines!

As always, the dinner and the social evening that followed gave all those present the opportunity to renew old Templar friendships and to make new ones. Naturally, a recurring topic was ways in which to advance the KTI Order in North America. First and foremost was the agreement to hold another US Encampment and Conference this coming Fall in order to keep the ball rolling.

As is our long-established custom, Sunday focused on a full Communion service. Several fine traditional American hymns were sung, with ‘Down To the River to Pray’ once again clearly being particularly popular and moving. The sermon by Minister Brother Dowson centred on the concept of Diligence in the New Testament and its application in our everyday lives.

After the Benediction came the now familiar slight sadness that comes with the breaking of the Encampment, the handshakes, bearhugs and agreements to keep in touch electronically until the next time when our fellowship in person is restored. Until then, thanks again to all who attended, who helped with the organisation of a wonderful weekend, and stay safe and true until we meet again!

Once all the brethren had set off for home, the Rosslyn Priory delegation visited several historic sites in Pennsylvania and neighbouring West Virginia and Ohio. The heritage of all the nations in which we operate is very important to us, and we were fascinated by this close up glimpse into the history of this industrial region that provided so much of the material that built the greatest nation in the world.

The Knights Templar Order’s commitment to building a serious machine in the USA was once again demonstrated last month, with our first conference in one of America’s northern states. A leadership team from the Rosslyn Priory joined with brethren who travelled from all corners of the United States (and also from Canada) for two days of lectures, discussions, prayers and our unique Templar comradeship.