The Alt-Right Turns To God

The Alt-Right Turns To God

Here’s another very welcome sign of the steady spread of real Christianity among former atheist members of the so-called ‘Alt-right’. The latest to see the light is Stefan Molyneux. The popular blogger credits his awakening largely to what he experienced when he took part in the massive – and overtly Christian – Independence Day march in Warsaw last year.

But it is simply a requisite first step that a person have some form of belief in God for me to be able to trust them.

Molyneux followed up that tweet with another, which also shows the extent of his awakening: 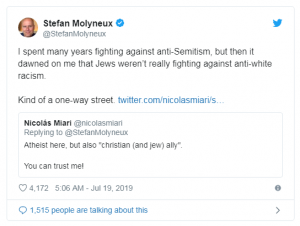 The fact that he is willing to openly tweet about the Talmudists and Zionists and their anti-white racism, when he obviously knows that their censorship machine is on the rampage, makes us much more inclined to believe he is being honest about his Christian transformation.

The only people who calls out the latter-day Pharisees at this point are people who believe they have a moral imperative to do so. Because everyone knows all too well what happens when you do it.

So we think that Stefan Molyneux is telling the truth when he says that his experience in Poland changed him.

Some people don’t know which side they’re on yet, or they have yet to discover God. That doesn’t mean they’re bad. It takes time.

Another one who appears to have seen the light is Roosh V. Just as with Stefan, he was constructively criticised in the document ‘Alt-Right – Not Right’, which was written by Nick Griffin and which we circulated widely when it was first produced.

Even then, Roosh was moving away from his disgusting anti-woman libertinism and beginning to realise that our struggle must begin with spiritual decency and with large and loving families. More recently, he seems to have ‘got it’ much more fully. Roosh  recently discovered God. It has been very inspiring to watch. We hope he will now use his continuing influence on many young men to encourage them to find decent girls and start families, rather than wasting their lives trying to pick up sluts for one-night stands.

There are many such cases. The right-wing appears to be undergoing a spiritual revival. Even the ultra-Nazi Andrew Anglin is posting more and more about the crucial role that Christiantity must play if the European peoples of the world are to have a future. He has a long way to go before he gets over his fetish with the evil concept of ‘white sharia’, but he appears to be on the right path.

There is more joy in Heaven over one sinner who repents….. So right now there must be a little extra joy among the angels!

This is so encouraging to see, despite everything else that is happening. Without God, we do not stand a chance. With God, we cannot lose. Deus Vult!