The Officer Who Went To War With A Broadsword!

The Officer Who Went To War With A Broadsword!

John Malcolm Thorpe Fleming Churchill was the last British soldier to go to war with  bow and arrows and a broadsword. And he did it during World War Two!

To those he fought beside, Jack Churchill seemed like a man without fear, but to those he faced in combat, he was a terrifying figure, such was his bravery in battle. Few could withstand him at close quarters. He moved quickly and quietly, workmanlike and efficient, most often with a basket-hilted broadsword in one hand and a rifle, bayonet honed to a keen edge, in the other. The combination of sword and bayonet suited him. He practiced hard and used his skills at any opportunity.

Jack was a crack shot with a rifle or a pistol, but he had a talent for archery, too. Before the outbreak of war in 1939, Jack was in Oslo, Norway, competing in the World Archery Championships. In ’39, the championship was in its eighth year, and it still runs today, but during the war years it did not run, and Jack Churchill had to find another venue to display his abilities with this particular weapon. He took himself and his bow back to Britain.

The fighting around the ancient port of Dunkirk in northern France in 1940 was some of the fiercest the British army had yet seen. All across Europe, the chaos of war was escalating rapidly. Countries fell, governments were replaced, maps were redrawn. The steady advance of the Nazi war machine seemed unstoppable.

It was during May of 1940 that Jack Churchill performed the feat which cemented his already growing reputation. ‘Fighting Jack Churchill,’ they called him after that. They were in a tower overlooking an empty little town. Jack was in charge of a small unit of men, and they were preparing an ambush. An enemy patrol was due through the town at any moment. As usual, Jack was armed with a longbow, broadsword, bayonet and small arms. He fairly bristled with weaponry. There were two knives and an unusual looking revolver on his belt.

There were grenades on his belt, too. His small pack hid water, a little food, and a very comprehensive first aid kit. Ammunition in pouches was strapped under the pack, the quiver of arrows for the bow was strapped securely to the side. There was a keen look in his eyes, and the men around felt their fear lessen as they watched him. He was not afraid.

The orders had been given to the men at the base of the tower, and to the men concealed in the surrounding streets and buildings. Fighting Jack’s tower would the signal the attack.

Through the rough opening in the floor of the tower flowed the loose-limbed form of the tall longbow archer. The bow itself was by no means a small weapon, being almost as long as the man himself, yet he negotiated the ladder and the hatch with ease. He clinked and rustled as he moved forward to the parapet and peered over.

In the street ahead, the men of the enemy patrol appeared, moving at a quick trot. They were formed up into a tight column and their weapons were held loose and ready in their hands. A young sergeant led them, looking suspiciously around as if he suspected something. Jack stood up to his full height, suddenly, and the bow was in his hand.

“I’ll shoot that first man with this arrow!” he said in a clear voice. “Ready!”

The arrow he fitted to the bowstring was very long and very straight. The point of the arrow was heavy and barbed, the feathering at the back was clean and neatly clipped. There were another nineteen in the quiver. In one flowing, practiced motion, he took his stance, raised his bow and released the deadly missile. The bowstring thrummed heavily in the tense air, and the arrow crossed the distance between Churchill and the Sergeant at a terrifying velocity.

The Sergeant raised his eyes to the tower. He took in what was happening in an instant. He was raising his hand and taking a breath to shout when the arrow hit him in the soft spot at the base of his neck. He was dead before he hit the ground. 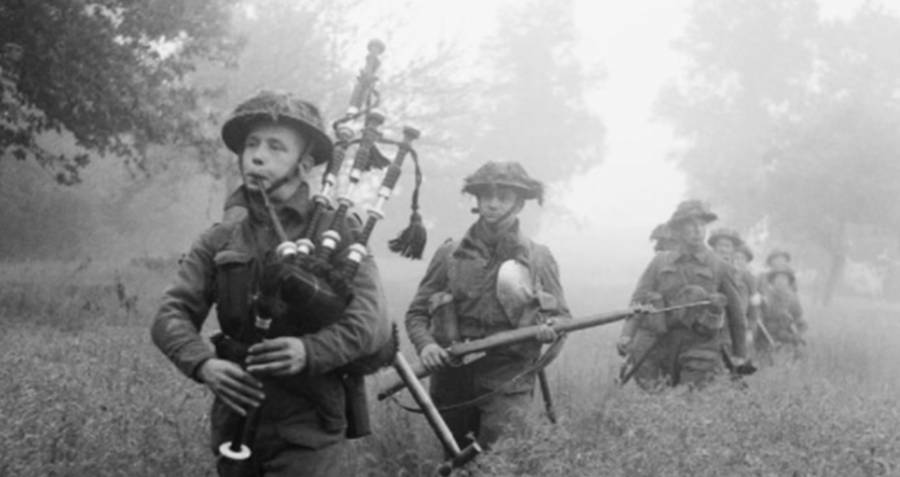 The tower was full of soldiers, they were raising rifles to their shoulders. There were soldiers in the buildings on either side. Sudden machine gunfire peppered the ground behind the patrol. They dropped, sought cover, tried to return fire, but they were pinned down by Churchill’s unit. The man himself appeared with the sword in his hand at the bottom of the tower. Leading a small group of men with him, he sprinted forward, keeping his head down as he ran.

Above him, the men in the tower provided covering fire. He heard the machine gun again, and a barrage of rifle fire. Then he held up his sword and yelled “Charge!” through the din. The men around him began firing and yelling as they surged forward to engage the patrol, but Jack slipped to one side.

He counted to ten. The patrol was fighting hand to hand and pressing forward against his unit. The suppressing fire slackened. Jack ran at full speed into the side of the press of enemy soldiers, vaulting a low wall, and laying about himself with the broadsword.

Jack felled three of the enemy before they were even aware of him, and another two as they were turning to face him. Then he shot two at close range with the revolver in his left hand, and somebody shouted out in German and raised up a bit of white cloth. The patrol surrendered, laid down their arms and were taken prisoner. That day Jack became a legend and he was to go on and serve his country with distinction, then to live a long and happy life until 1996.