While English counter-jihad activist Tommy Robinson is in a dangerous, Islamist-infested prison, the man who has taken over running his website while he is locked up for confronting Muslim grooming gang members is causing CHAOS in his movement at the very time that its members should be campaigning for him to be properly protected in prison.

His new webmaster, Avi Yemini, who has both Australian and Israeli citizenship, describes himself as a media personality.

I GREW UP IN AN ULTRA-ORTHODOX JEWISH HOME OF 17 CHILDREN.

OUR FAMILY WAS RULED BY AN ABUSIVE AND NARCISSISTIC FATHER WHO USED SYSTEMATIC VIOLENCE AND A DISTORTED AND WARPED INTERPRETATION OF RELIGION TO CONTROL, MANIPULATE AND ULTIMATELY TRAUMATIZE FOR OVER 30 YEARS. I WAS KICKED OUT OF HOME AT 13 YEARS OLD AND SPENT TIME ON THE STREETS, IN GROUP HOMES AND FOSTER CARE. I ENDED UP ADDICTED TO HEROIN AND OFTEN FOUND MYSELF IN TROUBLE WITH THE LAW.

AT NINETEEN I VOLUNTEERED TO JOIN THE ISRAEL DEFENCE FORCE IN A BID TO KICK MY ADDICTION AND DO SOMETHING MEANINGFUL WITH MY LIFE. MY TIME AS A GOLANI SHARPSHOOTER CHANGED ME AND THE EXPERIENCE OF FINALLY BELONGING TO SOMETHING THAT FELT LIKE A FAMILY HELPED TURN THINGS AROUND FOR ME.

In April this year, he was refused entry into the United States over fears of possible involvement in terrorism and violence. He responded to an article about his exclusion with a series of tweets, including this one: 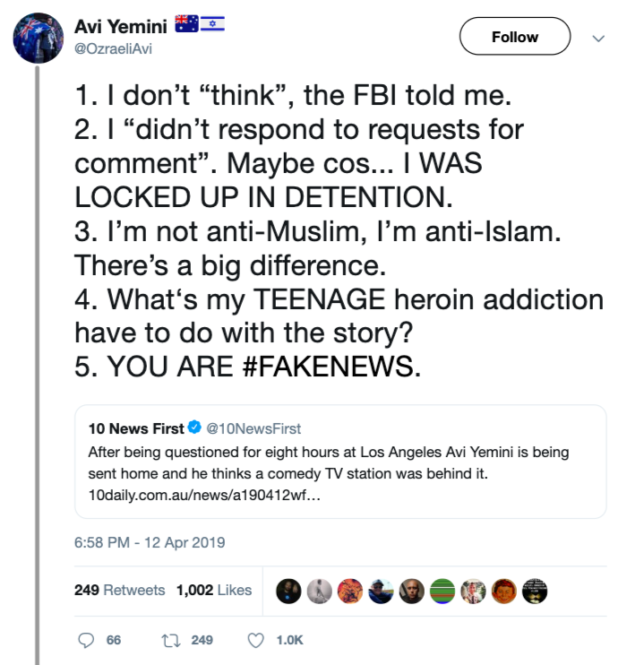 He also pled guilty to charges of beating up his wife earlier this month.

Yemeni has caused havoc in Britain’s counter-jihad movement by gagging and sacking a number of former well-known pro-Tommy Robinson activists.

It was Yemeni who deplatformed Shazia Hobbs, the half Scottish, half Pakistani author noted for a searingly honest book about how experiences with forced marriage and sexual abuse in Britain’s Muslim community. More recently, however, she has spoken about the role of the Frankfurt School in undermining Western society. Everything she has spoken about is true, but to Avi Yemeni, just like the people who drafted Britain’s repressive ‘Race Laws’ “the truth is no defence”.

He also moved to kick out Dionne Miller, a former British police officer who spoke at the last big rally in support of Tommy outside his Old Bailey court case about how efforts to bring Muslim grooming gang abusers to justice, and official efforts to silence her.

Ironically, within weeks of being given a platform to explain how the British authorities tried to silence them, both women – along with a number of other formerly committed activists – have now been silenced by an Australian-Israeli citizen!

His motivation appears to be the fact that all his victims had expressed concern over the hugely disproportionate number of Jewish politicians, lawyers, media figures and activists involved in the campaign to force Christian heritage, ‘white’ countries to accept massive immigration from the Third World in general and Muslim countries in particular.

Quite why he thinks that persecuting respected people for the ‘crime’ of mentioning a self-evident truth will in some way ‘fight anti-semitism’ is unclear. More likely such heavy-handed over-reaction will have exactly the opposite effect.

Especially among Tommy Robinson’s supporters, who overwhelmingly think that the individuals he has left in charge while he is in prison should continue the work of opposing the Islamification of Britain, not waste time and energy persecuting people who have said things that they do not want said. If freedom of speech means anything, it means freedom of speech for everyone!