A dramatic shift is taking place in Britain’s ‘counter-jihad’ movement. With Tommy Robinson outrageously locked up for confronting grooming gang members, the second-rate hasbara (more on this below) agents running the show completely while he’s away have made such ham-fisted moves against several key former Tommy allies that all hell has broken loose!

The sight of people who were central to the very popular ‘Day of Freedom’ now being gagged by what they thought was their own movement has sparked a wave of resignations and, even better, well-informed protest videos.

Here’s a clever and succinct one:

Here’s another that pulls no punches:

People who are being woken up by such things are then stunned to find that all this was set out in great detail way back at the start of 2012. Click here to read the expose.

One of the main players in the group that has been running and manipulating the UK’ counter-jihad movement for their own ends is a man who calls himself “Brian of London”.

Brian of London’s real name is Brian Bishko. He lived in London for a few years after leaving his native South Africa, where his family had been anti-apartheid campaigners. As with many such people, they quickly left the ‘rainbow nation’ they had heped create by agitating against white minority rule.

He now lives in Israel. He appears in public using this name, for example in this video segment, which he tweeted out a few days ago.) 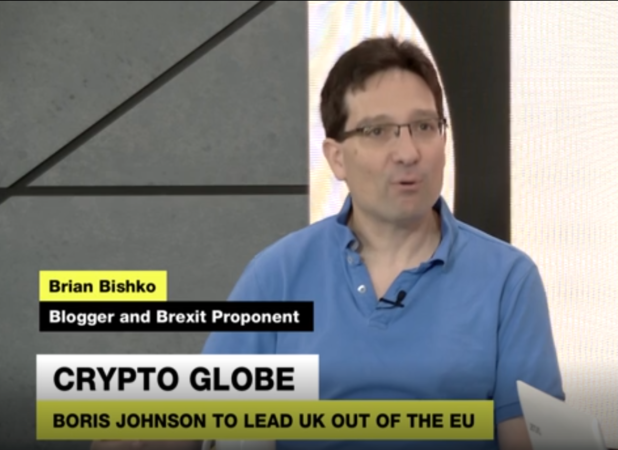 Why does this man use so many fake names? It’s not like he’s in any danger of being arrested, is it? He’s not a dissident. He’s not challenging the policies or worldview of the government in the country he lives in, Israel; he is, rather, defending and affirming them. They’re more likely to give him a medal than serve him with an arrest warrant. (In fact, he has won awards for his hasbara propaganda; see below).

He demonstrably has connections to the Israeli security Establishment.

Here’s an interesting photo. On the right Barak Raz, IDF spokesman “of the division commanding West Bank operations.” On the left we see Avi Mayer, who once described himself as “Spokesman of The Jewish Agency for Israel, the largest Jewish nonprofit organization in the world” and someone who “previously served in the IDF Spokesperson’s Unit”. But here he’s being modest. In reality, he was the Jewish Agency’s Social Media Director.

He trained people in how to use the internet to propagandize for Israel. And now he does essentially the same thing as the American Jewish Committee’s head of global communications or, as they put it, “chief storyteller“.

There’s a good discussion of hasbara and a mention of Avi Mayer in Max Blumenthal’s book Goliath: Life and Loathing in Greater Israel.

Under the leadership of Prime Minister Benjamin Netanyahu, a professional explainer who spent the early years of his political career as a frequent guest on prime time American news programs perfecting the slickness of the Beltway pundit class, the Israeli government invested unprecedented resources into hasbara. Once the sole responsibility of the Israeli foreign ministry, the task of disseminating hasbara fell to a special Ministry of Public Diplomacy led by Yuli Edelstein, a rightist settler and government minister who called Arabs a “despicable nation.”
Edelstein’s ministry boasted an advanced “situation room,” a paid media team, and coordination of a volunteer force that claimed to include thousands of volunteer bloggers, tweeters, and Facebook commenters fed with talking points and who flood social media with hasbara in five languages. The exploits of the propaganda soldiers conscripted into Israel’s online army have helped give rise to the phenomenon of the “hasbara troll,” an often faceless, shrill and relentless nuisance deployed on Twitter and Facebook to harass public figures who expressed skepticism of official Israeli policy or sympathy for the Palestinians. These efforts have been complemented by the office of the prime minister, the IDF Spokesperson’s Unit, and the Ministry of Tourism and Culture, each of which hosted newly created hasbara units. Even the Jewish Agency, a state-funded para-governmental agency primarily engaged in absorbing and settling new Jewish immigrants, employed a full-time social media operative named Avi Mayer, who spent his days on Twitter, attacking Palestine solidarity activists with usually baseless claims of anti-Semitism and deception.
Whether they liked it or not, every Jewish Israeli citizen was a potential recruit for the national hasbara brigade. While Tel Aviv University sent hasbara delegations to campuses across Europe and the United States, the National Union of Israeli Students offered Israeli college students $2,000 to spread propaganda “from the comfort of home.” EL AL Airlines deployed its stewards and stewardesses into American cities to make the case for Israel during specially allotted paid vacation days. Meanwhile, back at Ben Gurion International Airport, large billboards posted by the Ministry of Hasbara instructed Israelis to “be good diplomats” when they travel abroad. By corralling an entire population into promoting Israel as “the only democracy in the Middle East,” the state unconsciously cultivated a culture that treated dissent and critical inquiry with instinctive hostility.
In 2005, the American reality TV program The Apprentice reappeared in Israel as The Diplomat, a hit reality show featuring hundreds of Israeli citizens engaging in heated hasbara competitions before a captive national audience and panel of judges that included top army generals and journalists.

THEY CAME ONE BY ONE, SOMETIMES IN PAIRS. QUIETLY THEY ENTERED THE AUDITORIUM. UNASSUMING PEOPLE, YOU MIGHT NOT NOTICE IF YOU PASSED IN THE STREET. NO EXTERNAL FACTORS COULD ALERT YOU TO THE FACT THAT THESE ARE ELITE WARRIORS OF THE MIND.

THE HASBY AWARDS, UNDER THE AUSPICES OF FAMOUS BLOGGER ELDER OF ZIYON, HONOR AND RECOGNIZE SOME OF ISRAEL’S GREATEST ACTIVISTS WHO WORK TIRELESSLY TO DEFEND ISRAEL. ISRAEL HAS IDF WARRIORS AND SECRET SERVICE, SECURITY FORCES TAKING CARE OF THE PHYSICAL BATTLE. THE WARRIORS OF THE MIND ARE THOSE WHO HAVE STEPPED FORWARD TO TAKE ON THE BATTLE OF THOUGHTS AND EMOTIONS WHICH HAS, IN MANY WAYS, BECOME MORE SIGNIFICANT THAN THE PHYSICAL FIGHT.

Will Brian one day get an award for running the Tommy Robinson operation? Time will tell.

Bishko also was involved with the one of the most popular Israeli English-language blogs, Israellycool, which now seems to have been shut down. Occasionally, he is described as the founder of this blog; elsewhere, a guy called AussieDave is mentioned as the founder.

The blog has documented connections to Israel’s security services. For example, it has received official briefings from military sources.

I’VE COME INTO POSSESSION OF A SERIES OF TWEETS FROM 2010 AND SHARED AMONG AUSSIE DAVE, THE JEWISH INTERNET TASK FORCE’S (JIDF) DAVID APPLETREE (THE NOM DE GUERRE OF DAVID BROTSKY) AND OTHER MEMBERS OF THE HASBARA JIHAD BRIGADE.  THEY DOCUMENT A COORDINATED PROJECT TO FORGE FACEBOOK ACCOUNTS AND IDENTITIES IN ORDER TO AMPLIFY THEIR PRO-ISRAEL EFFORTS AMONG THE SOCIAL NETWORKING COMMUNITY.  AMONG THE ACTIVITIES IN WHICH THEY’VE ENGAGED, MORE RECENTLY ARE THE CREATION OF THE “DAVID LOEB” FACEBOOK PROFILE WHICH AUSSIE DAVE USED AS A HOAX IDENTITY. AUSSIE DAVE ALSO REVEALS THAT HE’S USED A FAKE ID IN ORDER TO INFILTRATE THIS PRO-PALESTINIAN FACEBOOK GROUP. ONCE ACCEPTED, HE POSTS INCENDIARY PRO-TERROR COMMENTS SEEKING TO BAIT OTHER MEMBERS INTO ESCALATING THE CONVERSATION.  SUCH PROVOCATIONS CAN THEN BE USED BY THE HASBARA ACTIVISTS TO DISCREDIT THE CAUSE AND GENERAL AND GET GROUPS TAKEN DOWN.

Of course, such online disruption and infiltration is not confined to Palestinians. Most of the ugly ‘neo-Nazi’ groups that do so much to discredit God-decreed nationalism are riddled with agents and regularly used to incite and entrap fools. Be warned!