The most important intellectual trend setter in the modern American left is a callous monster who believes the brutal slaughter of an entire family of innocent children and their parents by his Bolshevik heroes was a good thing.

Bhaskar Sunkara, the founder of Jacobin magazine, the top publication among 'democratic socialists' (i.e. Marxists) angered many with a now-deleted tweet over the weekend in which he declared that the brutal slaying of the holy Romanov children was justified.

Sunkara launched Jacobin in 2010. In 2016, Vox termed it “perhaps the most relevant and important publication of the American political left today,” stating that, “In 2016 it’s bigger than ever, thanks to Bernie Sanders.” Its website receives more than 2 million hits a month.

Sunkara also writes for Vice, The New York Times, The Guardian, and The Washington Post, among other outlets. He has appeared on programs on PBS, MSNBC, and FX, and this year, he was named to Fortune magazine’s “40 Under 40” list in the Government and Politics category. He has also served as vice-chair of the Democratic Socialists of America, which has successfully gotten two candidates elected to Congress.

In a conversation with fact-checker Alex Colston, in which Colston declares that people should want President Trump, recently found to have contracted the coronavirus, to die, Sunakara replies: “Wishing death upon other humans is generally frowned upon. Even the ones that seem basically irredeemable.”

When Colston responds that President Trump is guilty of America’s coronavirus deaths and that “maybe justice demands more than being sentimental about Trump’s humanity,” Sunkara responds: “The question isn’t what we think justice demands. I think killing little Romanov children was justified. But it’s not surprising why these views are controversial given most people’s ethical and moral frameworks.” 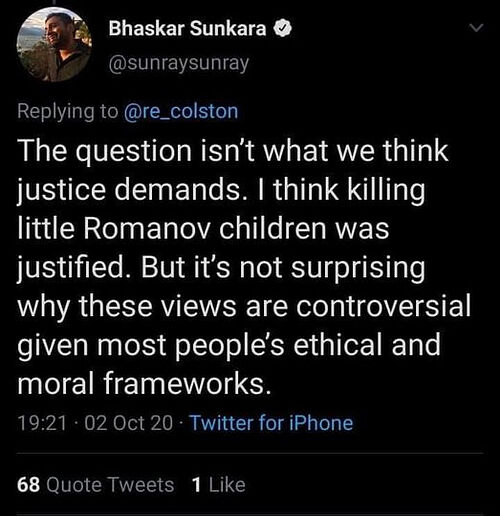 In response to Sunkara’s callous statement, the Russian Imperial Union-Order East Coast quoted a short account of the murder of the Royal Martyr Grand Duchess Anastasia, of which Sunkara approves: “She kept running about and hid herself behind a pillow, on her body were 32 wounds. The Grand Duchess Anastasia Nicholaevna fell down in a faint. When they began to examine her she began to scream wildly and they dispatched her with bayonets and butt ends of their rifles."

In his article on Sunkara’s comments, “Child Regicide and Jacobin,” Rod Dreher quotes from Robert Massie’s account of the murders in his classic Nicholas and Alexandra:

When all were assembled, Yurovsky reentered the room, followed by his entire Cheka squad carrying revolvers. He stepped forward and declared quickly, “Your relations have tried to save you. They have failed and we must now shoot you.”

Nicholas, his arm still around Alexis, began to rise from his chair to protect his wife and son. He had just time to say “What…?” before Yurovsky pointed his revolver directly at the Tsar’s head and fired. Nicholas died instantly. At this signal, the entire squad of executioners began to shoot. Alexandra had time only to raise her hand and make the sign of the cross before she too was killed by a single bullet. Olga, Tatiana and Marie, standing behind their mother, were hit and died quickly. Botkin, Kharitonov and Trupp also fell in the hail of bullets. Demidova, the maid, survived the first volley, and rather than reload, the executioners took rifles from the next room and pursued her, stabbing with bayonets. Screaming, running back and forth along the wall like a trapped animal, she tried to fend them off with the cushion. At last she fell, pierced by bayonets more than thirty times. Jimmy the spaniel was killed when his head was crushed by a rifle butt.

The room, filled with the smoke and stench of gunpowder, became suddenly quiet. Blood was running in streams from the bodies on the floor. Then there was a movement and a low groan. Alexis, lying on the floor still in the arms of the Tsar, feebly moved his hand to clutch his father’s coat. Savagely, one of the executioners kicked the Tsarevich in the head with his heavy boot. Yurovsky stepped up and fired two shots into the boy’s ear. Just at that moment, Anastasia, who had only fainted, regained consciousness and screamed. With bayonets and rifle butts, the entire band turned on her. In a moment, she too lay still. It was ended.

As Rod Dreher writes “The founding editor of the leading intellectual voice of the American Left believes this was all fine. This is who he is. This is who they are.”

Sunkara, however, declares: “History has absolved me. No more tsars.”