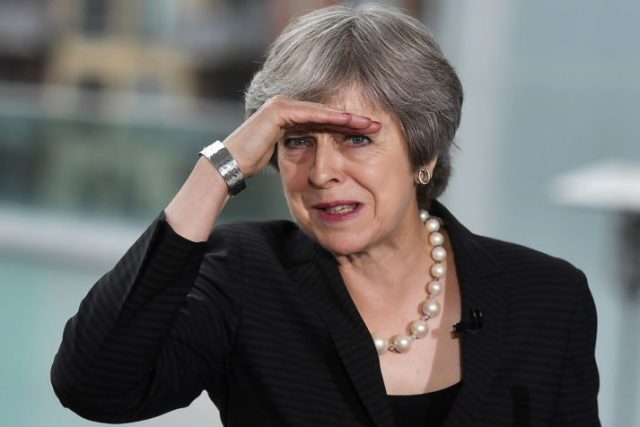 Britain's Prime Minister Theresa May gestures as she delivers a keynote speech on Brexit at Waterfront Hall in Belfast, Northern Ireland, on July 20, 2018. - With a trip to Northern Ireland this week, May began a tour of Britain to convince voters to back her blueprint for close economic ties with the bloc after Brexit next March. (Photo by Charles McQuillan / POOL / AFP) (Photo credit should read CHARLES MCQUILLAN/AFP/Getty Images)

Immigration into Britain is set to surge to a record high – despite the fact that concern and anger over the rapidly changing face of the country was the key reason for the majority Brexit vote.

After those leaving Britain have been taken into account, the Government’s proposals would mean ‘net migration’ – the number of immigrants minus the number of those emigrating – spiralling to 380,000 a year, the think-tank added.

This beats even the previous peak of 336,000 in 2015, and compares with an average of 250,000 a year over the past decade.
Migration Watch chairman Lord Green of Deddington said: ‘The members of the public who want to see immigration reduced will be furious if the outcome of Brexit is to increase immigration rather than reduce it. The Government needs to re-think this and soon.’

In its report, the think-tank says the leap in immigration will come mainly because of much lower barriers for workers with mid-level skills.

It added: ‘Far from reducing immigration to sustainable levels, these proposals are likely to see net migration rise.

‘The inflow will include a far greater proportion of non-EU migrants than is currently the case. In effect, EU migrants would be replaced, and more, by migrants from the rest of the world.’

To put it bluntly, this means that the political elite’s response to public concern over immigration is not to stop it, but to change its main source. To put it bluntly, this means that – even if some sort of Brexit is allowed to go ahead – the Poles and Lithuanians who have been arriving in recent years will be replaced by migrants from places like Pakistan and Lagos. Which, needless to say, is not what 17.4 million Brexit voters had in mind!