They won’t give up until every Christian has been brow-beaten and blackmailed into ignoring the Bible and collaborating with sin! The latest example of the LGBTQ+ war on Christianity comes from Colorado, where a Christian baker is being sued for the third time after allegedly refusing to make a cake to ‘celebrate’ the unnatural and unGodly mutilation of a human being.

Jack Phillips, who owns the Masterpiece Cakeshop in Lakewood, has previously made national headlines for refusing to bake cakes that are against his Christian faith.

He is now the subject of his third lawsuit after transgender woman Autumn Scardina filed a court documents last week accusing him of refusing to make her gender transition cake.

It comes after the Supreme Court ruled in the baker’s favor last year after he was sued for refusing to make a wedding cake for a same-sex couple.

The justices’ decision turned on what the court described as anti-religious bias on the Colorado Civil Rights Commission when it ruled against Phillips.

The justices voted 7-2 that the commission violated Phillips’ rights under the First Amendment. 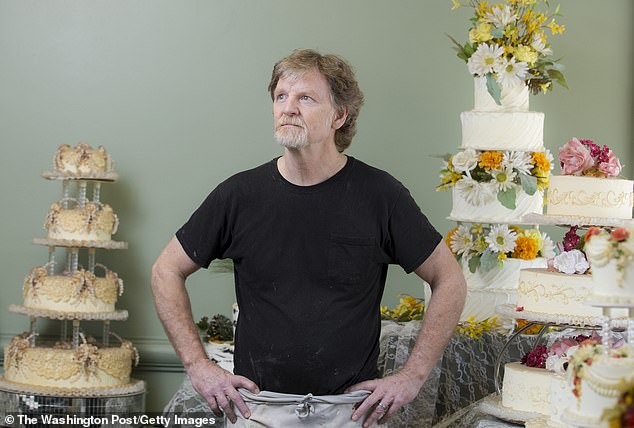 The same-sex couple at the heart of the case, Charlie Craig and Dave Mullins, complained to the Colorado commission in 2012 after they visited Phillips’ Masterpiece Cakeshop in suburban Denver and the baker quickly told them he would not create a cake for their wedding celebration.

They were married in Massachusetts because same sex marriage was not yet legal in Colorado.

Scardina, the transgender woman who filed the recent lawsuit against the baker, placed the order for a cake celebrating her gender transition on the day the Supreme Court handed down its decision.

She filed a lawsuit after that order was declined but the suit was dismissed.

The lawsuit she filed last week is her second attempt at suing Phillips for what she says is discrimination and unfair trade practices.

‘Masterpiece Cakeshop said before the Supreme Court they would serve any baked good to members of the LGBTQ community. It was just the religious significance of it being a wedding cake,’ her attorney Paula Griesen said.

‘We don’t believe they’ve been honest with the public.’

The lawsuit filed by Scardina claims that Phillips and Masterpiece Cakeshop had confirmed they would happily make the exact same cake requested by her for other customers.

Phillips’ attorneys issued a statement after the lawsuit was filed, saying it rehashed old claims.

‘A new lawsuit has been filed against Masterpiece Cakeshop that appears to largely rehash old claims. The State of Colorado abandoned similar ones just a few months ago.

‘So this latest attack by Scardina looks like yet another desperate attempt to harass cake artist Jack Phillips. And it stumbles over the one detail that matters most: Jack serves everyone; he just cannot express all messages through his custom cakes.’