Twitter has shut down the twitter page of the Russian Embassy in Syria for daring to draw attention to the fact that the White Helmets ‘rescue’ teams are in fact A; Qaeda terrorists producing extremely dishonest propaganda.

Without explanation, Twitter has suspended the official account of the Russian embassy in Syria after it posted a video critical of the controversial ‘White Helmets’ group, citing statements by the Russian military.

“Twitter suspends accounts that violate Twitter rules,” said the default notice on the grayed-out page of @RusEmbSyria on Tuesday. The social media platform notoriously refuses to comment on individual suspensions.

Here are just a couple of the photo sets that show the same men posing as rescue workers, then confirming that they are Islamist terrorists.

While the Ministry of Foreign Affairs in Moscow has yet to offer an official statement on the suspension, the Russian embassy in South Africa has chimed in, calling Twitter “thought police” for banning their colleagues.

The account was banned after posting factual criticism of the ‘White Helmets’ quoting the Russian military, the embassy said. 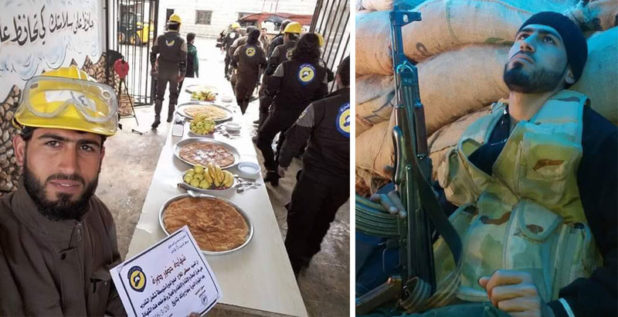