If you believed the Western mass media, the Ukrainians are winning the war. But anyone with a functioning brain, who remembers how the press have lied us into virtually EVERY war in modern history, will no not to believe the MSM.

But even those of us who know how the Lying Press and the global elite operate sometimes tend to be a bit overwhelmed by the sheer scale of their lies.

So this map, accurate as of yesterday evening, may come as a bit of a surprise. Ukraine is a vast country, and the Ukrainian military, including its huge neo-Nazi militia, is equipped with some of the best equipment that Nato possesses. And some of these troops are fighting bravely and hard.

But despite all that, the areas in red show the massive extent of full Russian control (though it's important to remember that they include several encircled major cities, where Kiev's forces have large numbers of civilians held as human shields. The blue area is the 'cauldon' in which the neo-Nazi punishment battalions which had been assembled ready to invade the Donbass are now trapped and being steadily eliminated. 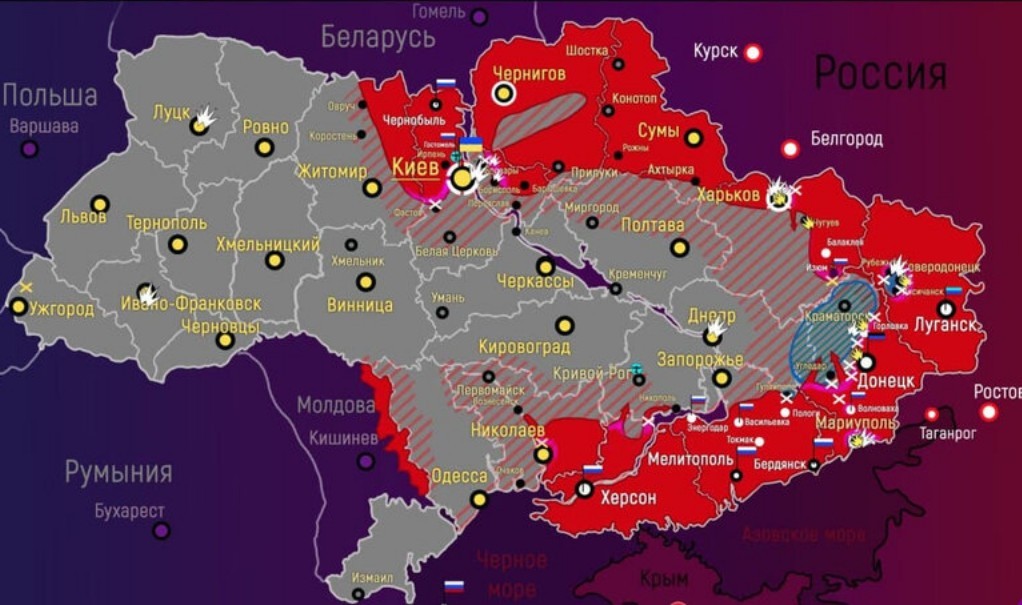 The hashed red shows areas still contested, but dominated by Russian firepower. This now includes the coast on both sides of the strategic port of Odessa. Note how a north-south pincer movement is developing.  This will cut the remaining Ukrainian forces in half, creating another military cauldron in which Ukrainian forces will have only one choice: surrender or die. This will clear the way for the complete liberation of the majority Russian-speaking eastern half of the country. It could even become the basis for a future peace settlement including the division of the failed state, with a neutral (like Finland) and genuinely Ukrainian Ukraine being established in the western half.

Alternatively, if the next week doesn't see a false flag chemical or nuclear plant terror attack which draws Nato into the conflict directly, the possibility remains that Zelensky will accept the offer that Putin has still left on the table: Declare Ukrainian neutrality and abandon plans to join Nato and the EU, disband the Nazi militia forces, grant full civil rights to Russian-speakers and a measure of federal autonomy to the Donbass regions. This remains the easiest option, and would end the terrible conflict IMMEDIATELY.

All we can do for now is to pray for such a reasonable and peaceful settlement, and look for ways to show solidarity with the victims of this terrible conflict about whom the Western media will not say one word - the civilians in the east who are still reeling from the brutality of neo-Nazi aggression during eight years of persecution and the last fortnight of outright war.