University Is a Scam

Once the treasure of the West, the university system­ largely founded by Christians, are hotbeds of deranged left-wing college professors and radical student-activists and cold house for Christians, Conservatives and every other “oppressor class.”

The deliberate mind poisoning of our youth is an issue the Templars have been addressing for several years now, but one aspect of the university system we have not touched on as much as we should is the corporatization of college and the massive debts passed on to the taxpayer.

The first thing you need to understand . . . no, understand isn’t the right word, there is not enough logic here to allow understanding . . . the first thing you need to know is that when the government spends about £14 billion this year on loans to students, government debt rises by £14 billion but government borrowing does not. That £14 billion does not count against the deficit. That’s because the national accounts treat student loans as financial transactions. A loan is issued. It is due to be paid back in the future. There is no impact on the deficit unless and until the borrower fails to pay back.

But wait a minute. The student loan system is not devised even on the basis that all these loans will be paid back. The whole point of the system is that if you don’t earn very much, you won’t pay back very much. It is designed that way for a reason: it helps to ensure that people are not put off attending university. They don’t bear the risk of having to make large repayments from small amounts of earnings. Perhaps 80 per cent of graduates will not repay in full, given existing rules. Jo Johnson, minister for higher education until the recent reshuffle, thinks that under present rules between 40 per cent and 45 per cent of the value of loans will not be repaid.

This is, in fact, reflected in the Department for Education’s own accounts, which are likely this year to write off more than £6 billion of the loans that it makes to students. It is, nevertheless, not reflected at all in government borrowing figures. 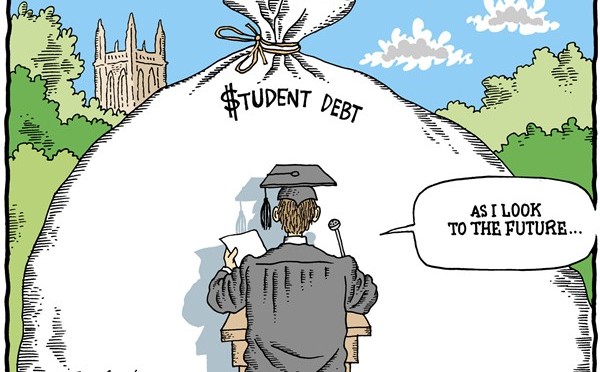 With the humanity departments swelling, many of the degrees handed out at our modern universities are not worth the paper they are written on. Standards have been reduced to ensure more people have access to University and hence: student loans! Student loans which are generously thrown at them by Banks preying on the nativity of teenagers eager for freedom from parental rule. In the UK, if a student fail to return the loan, the Government swoops in to rescue the in-debtor by paying off the loan with taxpayers’ money.

It is the third time in the last four years that the government has had to write off outstanding student loans even as officials make concerted efforts to round up more money from borrowers.

The government annually has to write off some of the $19 billion owing in student loans for a number of reasons: a debtor may file for bankruptcy, the debt itself passes a six-year legal limit on collection, or the debtor can't be found.

The Liberals have looked to make it easier for graduates to pay off their loans — and for the government to collect the cash — by increasing the minimum annual income they have to earn before they are required to make debt payments.

And for our American brothers and sisters, the stats are fightening…

With gender theory and sociology graduates flipping burgers and washing cars to pay off their debtors, eventually the Government will step in to clear the debt. In other words, we, the taxpayers, will have to pay for the poor decisions of liberals that wanted to extend the adolescence and study useless subjects.

Who could have guessed that semesters studying the 'Sociology of Frankenstein' at the university of Vermont, or 'Understanding the Obama's' at Pennsylvania University would be such a waste of time and money?

YouTube commentator has covered this issue extensively and we encourage our members and readers to watch his videos detailing the liberal takeover of colleges and the deliberate economic burdening of our sons and daughters: