Bill and Hillary Clinton are biting their nails over the growing body of evidence emerging over the extraordinary efforts of Clinton's lawyers to cover up his extensive links with disgraced paedophile and Mossad blackmail-ring operative Jeffrey Epstein.

It has been revealed that two former residential managers on Epstein's Caribbean Paedophile island were urged to sign a legal document swearing that Bill Clinton had never visited. Miles and Cathy Alexander were approached by Darren Indyke, the disgraced tycoon's attorney. The lawyer wanted the Alexanders to do something that would be of particular benefit to Hillary Clinton and her campaign to become the first female President of the United States, later that year.

It entailed them signing a sworn affidavit — which Indyke had already drafted for them — declaring they had never seen Senator Clinton's husband, President Bill Clinton, at their former home: 'Paedo Island', as it had come to be known. Whether or not the once-most powerful man in the world had set foot on a 78-acre speck in the U.S. Virgin Islands almost two decades ago says much about the toxicity of what is alleged to have happened there.

And that depraved hedonism is set to be examined in detail in court later this year after Prince Andrew failed last week in his attempt to have a civil sex assault action brought against him by Epstein's former underage 'slave', Virginia Roberts, thrown out.

Roberts has alleged that the Duke of York 'sexually abused her [Roberts, now known as Giuffre] on Epstein's private island in the U.S. Virgin Islands, Little St James'. (In a landmark investigation into the duke in late 2020, the Mail proved that he had been on the island at the same time as Roberts in early 2001.)

She has also claimed she met Clinton on the island and saw him in the company of two 'young girls'.

Both men deny Roberts's allegations. Clinton, whose presidency almost ended over his affair with White House intern Monica Lewinsky, denies ever being on Little St James or having knowledge of Epstein's crimes. The president and the prince's baleful involvement with Epstein is down to one woman — Ghislaine Maxwell. The subsequent damage to their reputations largely rests on the word of another — Roberts. But what is undisputed is that both men criss-crossed the world on Epstein's jets, receiving hospitality from the financier's young female staff. 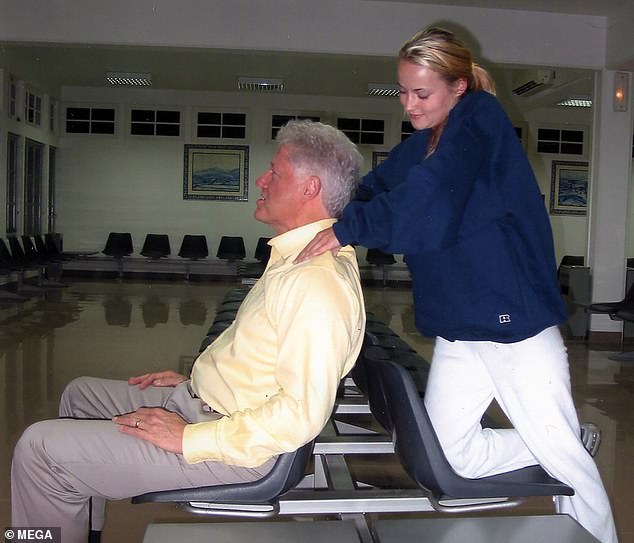 Whether that hospitality strayed into sexual favours is still unknown. In Andrew's case, his relationship with Epstein and Maxwell has now resulted in a dispute that could land, with potentially catastrophic consequences for the Royal Family, in a U.S. court of law.

That possibility of legal fall-out is what Epstein, who died in his prison cell in 2019, had tried to head off. Today, the Mail can reveal how he used his go-to attorney, Indyke, to protect famous male friends who must have followed the recent trial of Epstein's ex-lover Maxwell with more than a passing interest.

Arguably the two most gilded members of that circle were Clinton and Andrew. Both relationships with Epstein are said to have been launched and developed by Ghislaine Maxwell, that supreme networker —now a convicted paedophile pimp and trafficker. Today, the Mail investigates the associations between these three men.

Official logs of visitors to the White House during Clinton's first term as president indicate that Democrat donor Epstein was a trusted associate. He visited the White House at least 17 times between 1993 and 1995.

Yet the tycoon's access to the president took other forms. Epstein's 'little black book' of contacts contained several email addresses and no fewer than 21 telephone numbers for Clinton. A bizarre portrait of the president — wearing a blue cocktail dress and red high heels — even hung in Epstein's Manhattan townhouse.

Clinton appeared as a passenger on flight logs for Epstein's fleet of aircraft no less than 26 times between February 2002 and November 2003. One of Epstein's pilots, David Rodgers, gave a deposition in 2016 as part of a defamation case that Roberts brought against Maxwell. In his testimony he referred to his pilot's log book entries. They seemed to indicate that on at least two occasions Rodgers had flown Clinton and the duke in one of Epstein's aircraft.

The pilot added that in February 2002, on a flight from Miami to New York on the Boeing known as the 'Lolita Express', his passengers had included Clinton, four Secret Service agents, Epstein, Maxwell and 'Prince Andrew'. Rodgers added: 'I have a picture of me and the crew with Bill Clinton on the plane . . . To the best of my knowledge it was the first time that we had flown him'.

He said in July 2002 he had flown from Morocco to New York with Epstein, Maxwell, Prince Andrew, Clinton, Doug Band (Clinton's right-hand man) and 'probably nine Secret Service people' aboard.