Why Robots Will NOT Halt Immigration

Why Robots Will NOT Halt Immigration

New warnings that robots threaten millions of jobs in Britain, the USA and other advanced economies are being hailed by anti-immigration campaigners as heralding the end of mass Third World immigration into the West. Nearly half of British jobs are at risk of being taken over by robots, a report warned last night.

Technological advances mean 44 per cent of current roles could be automated, the Institute for Public Policy Research (IPPR) think-tank found.

Employees working in catering, retail and agriculture are most under threat by the march of machines.

The report raised the example of how Amazon has used sensors in its warehouses to monitor productivity.

The researchers said increasing automation had the potential to deliver a powerful boost to the productivity of UK business, bringing a future of ‘economic plenty’. 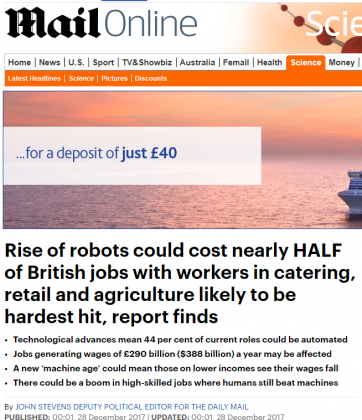 However, they warned that unless the change was properly managed by government, there was a danger that the benefits would be ‘narrowly’ concentrated in the hands of investors and small numbers of highly-skilled workers while the rest lost out.

The report warns that the new ‘machine age’ could mean those on lower incomes see their wages fall, which would be particularly devastating for certain parts of the country.

The research estimated that jobs generating wages of £290 billion ($388 billion) a year – representing a third of all wages and earnings from labour in the UK economy – have the potential to be automated.

Northern Ireland and North East England are most susceptible with 48 per cent of jobs there at high risk of being automated, compared to 39 per cent in London.

We are sorry to have to say that the hopeful anti-immigration campaigners are wrong. Although it is logical that robots taking unskilled jobs should render mass migration obsolete, to think so is to misread the problem now facing the West. It is not about who will or will not do the jobs, but who will be available to buy the things produced.

And the looming demographic collapse of the West means that the corporations who own so many politicians will see their profits threatened not by a shortage of labour, but a shortage of consumers. Thus they will continue to pressure the political elite to continue mass immigration, even when robots are doing much of the work.

In order to ensure that the newcomers can buy the things that robots produce, the corporations will press for higher taxes of the remaining productive Western middle class and also of robots. Consumption is even more important to capitalism than production, so nothing will be allowed to impede consumption.

Add this to the continued pressure for mass immigration and population replacement from viciously anti-white ideological and ethno-religious minorities, and the Great Replacement will continue, regardless of the robot revolution.

The only way to escape it is to move to nations whose governments reject it and which use new technologies as tools not for short-term profit, but for long-term national survival. And the only way to survive it and to help put things right in the end is to have children. Lots of them. Because demographics is destiny, and not even robots can change that.