Charge of the Light Brigade – The Folly and the Shame

One of the best remembered British military operations was also one of the biggest military disasters. In the middle of the nineteenth century the British and French joined forces with Turkey to try to throw the Russians out of Crimea.

The Charge of the Light Brigade provides an object lesson in the dangers of poor communications, unclear orders, and fools who think that there’s such a thing as a ‘good war’….

Two different poems about the Charge of the Light Brigade, the first being Tennyson’s famous poem and the second Kipling’s poem about the treatment of the survivors.

“The Charge of the Light Brigade”
By Alfred, Lord Tennyson

“Forward, the Light Brigade!”
Was there a man dismayed?
Not though the soldier knew
Someone had blundered.
Theirs not to make reply,
Theirs not to reason why,
Theirs but to do and die.
Into the valley of Death
Rode the six hundred.

Flashed all their sabres bare,
Flashed as they turned in air
Sabring the gunners there,
Charging an army, while
All the world wondered.
Plunged in the battery-smoke
Right through the line they broke;
Cossack and Russian
Reeled from the sabre stroke
Shattered and sundered.
Then they rode back, but not
Not the six hundred. 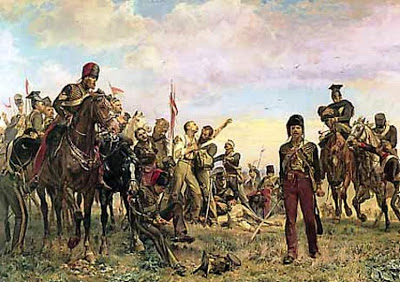 “The Last of the Light Brigade”
By Rudyard Kipling

There were thirty million English who talked of England’s might,
There were twenty broken troopers who lacked a bed for the night.
They had neither food nor money, they had neither service nor trade;
They were only shiftless soldiers, the last of the Light Brigade.

They felt that life was fleeting; they knew not that art was long,
That though they were dying of famine, they lived in deathless song.
They asked for a little money to keep the wolf from the door;
And the thirty million English sent twenty pounds and four!

They laid their heads together that were scarred and lined and grey;
Keen were the Russian sabres, but want was keener than they;
And an old Troop-Sergeant muttered, “Let us go to the man who writes
The things on Balaclava the kiddies at school recites.”

They went without bands or colours, a regiment ten-file strong,
To look for the Master-singer who had crowned them all in his song;
And, waiting his servant’s order, by the garden gate they stayed,
A desolate little cluster, the last of the Light Brigade.

They strove to stand to attention, to straighten the toil-bowed back;
They drilled on an empty stomach, the loose-knit files fell slack;
With stooping of weary shoulders, in garments tattered and frayed,
They shambled into his presence, the last of the Light Brigade.

The old Troop-Sergeant was spokesman, and “Beggin’ your pardon,” he said,
“You wrote o’ the Light Brigade, sir. Here’s all that isn’t dead.
An’ it’s all come true what you wrote, sir, regardin’ the mouth of hell;
For we’re all of us nigh to the workhouse, an’ we thought we’d call an’ tell.

“No, thank you, we don’t want food, sir; but couldn’t you take an’ write
A sort of ‘to be continued’ and ‘see next page’ o’ the fight?
We think that someone has blundered, an’ couldn’t you tell ’em how?
You wrote we were heroes once, sir. Please, write we are starving now.”

The poor little army departed, limping and lean and forlorn.
And the heart of the Master-singer grew hot with “the scorn of scorn.”
And he wrote for them wonderful verses that swept the land like flame,
Till the fatted souls of the English were scourged with the thing called Shame.

They sent a cheque to the felon that sprang from an Irish bog;
They healed the spavined cab-horse; they housed the homeless dog;
And they sent (you may call me a liar), when felon and beast were paid,
A cheque, for enough to live on, to the last of the Light Brigade.

O thirty million English that babble of England’s might,
Behold there are twenty heroes who lack their food to-night;
Our children’s children are lisping to “honour the charge they made – ”
And we leave to the streets and the workhouse the charge of the Light Brigade!