“Who Am I To Judge?” – The Problem With Liberal ‘Tolerance’

IF one is guided by the liberal media, the Ten Commandments have been replaced by one: “Thou shalt not judge.”

Judging and condemning the behaviors and lifestyles of others is considered unseemly at best and unchristian at worst.

First, if “it’s not up to me to judge,” that must apply to the wrongness of actions as well as their rightness. For which ever way we judge is a de facto judgment on the opposing view. For example, when Carrie Underwood endorsed same-sex “marriage” it was her moral judgment on the social contrivance and its supporters, as well as a moral insinuation, if not judgment, about the criticisms and critics. 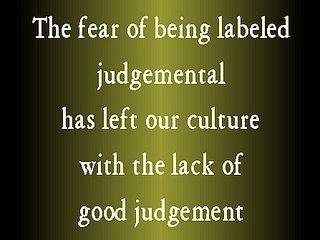 Third, fidelity to non-judgmentalism requires moral neutrality on all matters—an impossibility even for the entrenched non-judgmentalist. Regardless of his religious sympathies, he will consider things like cheating, rape, and exploitation as wrong and things like honesty, fairness, and charity as good.

Fourth, the person who refrains from judging truth from falsehood and good from evil quickly will find himself a victim of those adept at parading one for the other.

Lastly and most importantly for Christians, the “who-am-I-to-judge” ethic has no biblical warrant. Quite the opposite.

In his letter to the Colossians, St. Paul wanted his readers to make a moral distinction between the traditions of men and the teachings of Jesus so that they wouldn’t be taken “captive through hollow and deceptive philosophy.” Likewise, Jesus’ instruction in St. Matthew’s gospel about “fruit” inspection was to help his disciples from falling in with bad teachers and their sophistry.

Too often, socially nice Christians focus on what Jesus says a few verses up (“Do not judge, or you too will be judged”), isolate it from the rest of the chapter, and couple it with the second half of the Great Commandment, reasoning,

Since I would be offended if my neighbour pointed out my moral failings, I’ll not point out his. That way I love my neighbour as myself and relieve us both of any awkward moments.

A win-win with undeniable appeal, but in direct conflict with Jesus’s instruction, “If your brother sins, rebuke him.”

In a far cry from liberal “who-am-I-to-judge” morality, Jesus expects his people to make moral judgments, confronting others and invoking discipline when necessary. In fact, Paul had some sharp words for a congregation that failed to do just that.

The occasion was an instance of sexual immorality that went unaddressed within the Corinthian church. Scolding the assembly for its moral complacence, Paul ordered the expulsion of the offender “so that [his] sinful nature may be destroyed and his spirit saved on the day of the Lord.” In the same spirit, Paul told the Galatian believers, “if someone is caught in a sin, you who are spiritual should restore him gently.”

According to Jesus and the early Church, judgment and discipline are duties that the Church exercises for the health of the Body and the restoration and spiritual well-being of its members.

Who-am-I-to-judge Christians will demur, referencing a Pharisaical sting operation that outed an adulteress. Although the encounter nearly led to her stoning, neither the morality of her deed nor the moral authority to judge it was at issue. The woman had sinned, plain and simple, a fact acknowledged by Jesus in his parting instruction, “leave your life of sin.”

Had the religious SWAT team done the same, this biblical vignette might never have been recorded. Instead, they condemned her to death, and Jesus called into question their license to do so.

Anyone can judge the morality of an act, knowing only the applicable standard. But condemnation requires not only knowledge of the standard and the transgression, but what was in the transgressor’s mind (what did they know about the standard) and heart (what was their intent), places that no one has access to but God.

Today a common ploy to silence Christian objections to homosexualism is to point out heterosexual sin in the camp, citing Matthew 7:3 (“Why do you look at the speck of sawdust in your brother’s eye and pay no attention to the plank in your own eye?”).

Despite the stinging prose of the popular proof text, neither it nor the moral condition in the Church has any bearing on the morality of homosexualism and the novel institutions it promotes. What’s more, Jesus never said that one sinner shouldn’t judge the actions of another. Instead, in the context of Matthew chapter 7, Jesus teaches that we should be attentive to the “specks” in our eyes so that we can rightly discern the specks in others.

People who decline to do so—particularly, who-am-I-to-judge Christians—have much to answer for the moral pathologies of the church that they are quick to, uh, judge.

They are like the village physician whose patients are dying off because he doesn’t want to unsettle them with information about their life-threatening conditions. Or the best-friend-mom whose little angel has become a tyrant over momma’s fear that a “no” landing on the delicate ears of her budding prodigy would damage the sense of exceptionalness that she has worked so hard to nurture.

Love seeks the supreme good for others. Above all, love desires others to become the persons they were created to be: children of God, being transformed in the image of the Son, and enjoying unbroken fellowship with the Son and Father through the presence of the Holy Spirit.

Love means that I am my brother’s keeper, with the duty to observe, question, challenge, and, yes, judge his actions—not to condemn, but to guide, coach and encourage toward life abundant. To do otherwise is not love but indifference or cowardice.

We love others not by never having to say they’re sinning; but by helping them with their “specks” and allowing them to help us with ours.