SAUDI ARABIA has executed an Indonesian maid who killed her employer in self-defence when he tried to rape her. The judicial killing has sparked fresh outrage after the backlash faced following the brutal murder of Riyadh dissident Jamal Khashoggi.

Tati Tursilawati, a mother, was executed in the western Saudi city of Taif on Monday.

In a breach of international protocol, the execution took place without either Ms Tursilawati’s family or the Indonesian government being informed in advance.

Mrs Tursilawati was sentenced to death seven years ago for killing her employer.

She claimed she was acting in self-defence after he attempted to rape her.

The decision was furiously condemned by Indonesian president Joko Widodo who said: “We have called Saudi Arabia’s foreign minister and conveyed our protest.”

Lalu Muhammad Iqbal, director of the Indonesian foreign ministry’s citizens protection department, commented: “The execution of Tuti Tursilawati was done without notification to our representatives, either in Riyadh or Jeddah.”

He described the execution as “regrettable” – the diplomatic language tended to be used when a country is angry at a decision.

There is ongoing controversy over the treatment of migrant workers in Saudi Arabia and other Gulf Arab states. 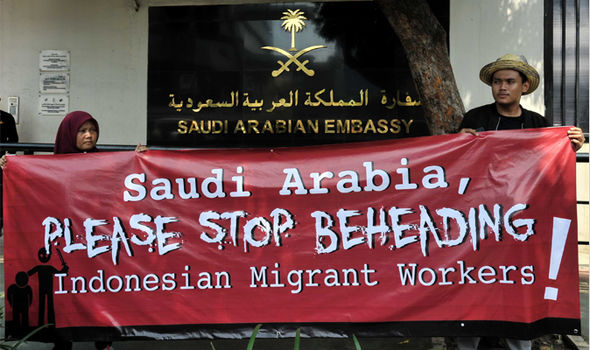 Mrs Tursilawati is the fourth Indonesian worker executed by the Saudis over the past three years, all without prior notice being given.

Another 18 Indonesians remain on death row in the strictly Islamist country, which has one of the worst human rights records in the world.

Saudi gold, however, has bought so many Western politicians that  it remains very unlikely that effective action will ever be taken against the brutal regime and its policy of spreading extremist Wahhabi Islamism all over the world.