What sort of monsters dig up and desecrate dead bodies just to score political points? The answer, of course, is not just the psychopaths behind Islamic State, who dug and smashed the graves of Muslim saints long before they started slaughtering and raping Christians and everyone else they hate. It is also done by the equally psychotic far-left.

Over the last year or so, Confederate war heroes buried in the USA have at the top of the left’s grave desecration hit-list. But now the deeply disturbed and twisted desire to dig up and destroy the dead has emerged at the very top of the newly elected socialist regime in Spain.

Spain’s new Prime Minister Pedro Sanchez has boasted of plans to remove the remains of Francisco Franco from his tomb in the Valley of the Fallen memorial complex outside Madrid.

“The decision about exhuming Franco’s remains is quite clear,” Oscar Puente, a senior member of the socialist party who is close to Sanchez, told a news conference.

The Valley of the Fallen was constructed as a memorial to the dead of both sides. Now the socialist regime wants to reopen old wounds by turning it into a “memorial to the victims of fascism”.

Their decision comes as the anniversary of the revolt by right-wing Spanish military officers in Spanish Morocco approaches. The revolt spread to mainland Spain. The Republicans succeeded in putting down the uprising in other areas, including Madrid, Spain's capital, but eventually were defeated by the Nationalist Catholic forces.

The first stage planned is the removal of the body of General Franco, and no doubt of the charismatic Falangist leader Jose Antonio Primo de Rivera, who was taken prisoner by the Reds and murdered in cold blood by a firing squad shortly after the start of the war.

At the very start of leftist terror in 1789, the ‘revolutionaries’ made a point of dragging the bones of the former kings of France from their resting place in the Basilique Saint Denis. The large medieval abbey church in the city of Saint-Denis, now a northern suburb of Paris, was badly damaged during the symbolic atrocity.

Similar insanely spiteful attacks on the graves of long-dead Tsars and saints were carried out by the Bolshevik regime imposed with Wall Street money on Russia in 1917.

Among the reasons for the outbreak of the Spanish Civil War in 1936 was the outrage felt by millions of Catholics over the Red campaign of desecrating churches, during which the mummified corpses of priests and nuns were dragged from crypts, ridiculed and destroyed. Meanwhile, the Red Terror also saw the murder of large numbers of priests and other ‘class enemies’.

Part of the reason for such disgusting actions was the outright hatred that is always fanned by the left’s propaganda of envy and resentment. But nowadays there is also cold calculation at work. The ‘right’ see history as about the past, the ‘left’ see it as a weapon to help them shape and control the future.

The now ageing revolutionaries of the left are terrified that – having lost the online war of ideas – they are losing their grip on the public in general and young people in particular. They have watched with dismay as popular support evaporates in former leftist strongholds from working class Britain to once staunchly Communist eastern Germany and in nations such as Italy.

Never forget that for these people – just like the Islamists with whom they have so much in common – “Democracy is like a train: when you reach your destination, you get off”. The words of Turkey’s President Erdogan sum up their position. The same goes for free speech.

So everywhere they still have power, the left and their liberal fellow-travellers are desperate to stamp out democracy and freedom. But to do so they need an excuse. And to get their excuse they need confrontation. 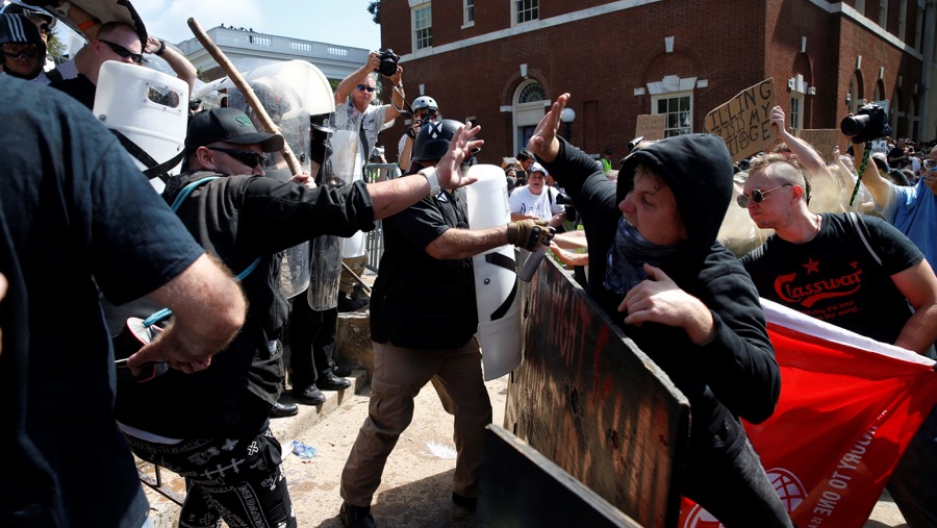 We saw the tactic worked to perfection at Charlottesville, where the removal of statues of Confederate generals, and threats even to dig up their bodies, were used to provoke the ‘right’ into demonstrations that were turned into traps. Once the traps had been sprung, the resulting confrontation and violence was used as the pretext for a massive purge of the Internet.

Thousands of accounts, including powerful voices which had swung the campaigns for both Brexit and Trump, were closed down. Thanks to the foolish over-reaction of a handful of ‘extremists’, the ability of the ‘right’ to dominate English-speaking cyberspace was drastically curtailed.

The next biggest language online across the world is Spanish, so the global left is now hell-bent on repeating the success of their post-Charlottesville purge in Spain and South America too. For that they need provocation and over-reaction – and Spain’s new socialist regime has already identified the perfect tactic.

This is why they used the very eve of the anniversary of the outbreak of the Spanish Civil War to confirm their sick plan to desecrate the grave of General Franco. This will go hand-in-hand with the destruction of the graves and memorials to the martyred Jose Antonio (pictured) and to the Romanian legionary icons Mota and Marin.

While these figures are far less known to the public than Franco, they are far more important to the ‘far-right’ all over Europe, and are thus ideal victims for desecration designed to provoke a violent reaction from the ‘fascist-fringe’ which will then be used as the excuse for a massive clampdown.

That will not just be aimed at the ‘far-right’, but also at any opposition to the plan by the new Spanish regime for a massive and rapid increase in the amount of African and Muslim immigration. This is ‘necessary’ because Spain is many years behind the rest of Western Europe in the Great Replacement programme of the global elite – for whom the far-left have always been useful tools.

Malice on this scale must be understood before it can be fought effectively. And evil on this scale is, of course, at its very core a spiritual issue. This is Satan at work in our world, which means that the solution begins with Jesus. Pray for deliverance from evil – and organise to be part of the human instrument through which Our Lord will cast down the Dark One and his earthly minions!