Martyrdom – the Motor of the Christian Revolution

Jesus’ death on the cross, as described in the New Testament, has become one of the most famous events. But what happened to the 12 disciples who were his closest followers? There are many sources, including the New Testament itself, apocryphal texts, early Christian historians, legends and lore. 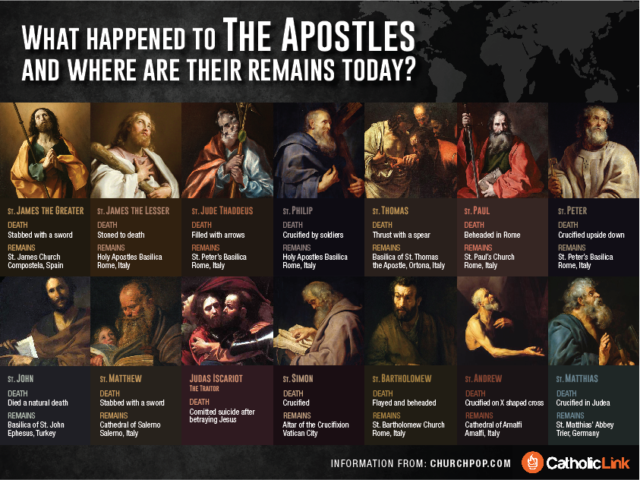 • Simon, AKA Peter: Simon-Peter, who was appointed by Jesus the leader of the new sect, is viewed by Roman Catholics as the first pope, was eventually martyred in Rome during the reign of the emperor Nero. As the story goes, Peter asked to be crucified upside down, so that his death would not be the equal of Jesus and the Romans supposedly obliged.

• Andrew: According to 15th Century religious historian Dorman Newman, Andrew—the brother of Peter—went to Patras in western Greece in 69 AD, where the Roman proconsul Aegeates debated religion with him. Aegeates tried to convince Andrew to forsake Christianity, so that he would not have to torture and execute him. But when that didn’t work, apparently he decided to give Andrew the full treatment. Andrew was scourged, and then tied rather than nailed to a cross, so that he would suffer for a longer time before dying. Andrew lived for two days, during which he preached to passersby.

• James (son of Zebedee, AKA James the Greater): Acts 12:1-19 says that James was killed with a sword. The newly-appointed governor of Judea, Herod Agrippa, decided to ingratiate himself with the Romans by persecuting leaders of the new sect. After James was arrested and led to place of execution, his unnamed accuser was moved by his courage. He not only repented and converted on the spot, but asked to be executed alongside James. The Roman executioners obliged, and both men were beheaded simultaneously.

• John: John was the only one of the original disciples not to die a violent death. Instead, he passed away peacefully in Patmos in his old age, sometime around 100 AD.

• Philip: Philip, the first of Jesus’ disciples, became a missionary in Asia. Eventually, he traveled to the Egyptian city of Heliopolis, where he was scourged, thrown into prison, and crucified in 54 AD.

• Bartholomew: Bartholomew supposedly preached in several countries, including India, where he translated the Gospel of Matthew for believers. In one account, “impatient idolaters” beat Bartholomew and then crucified him, while in another, he was skinned alive and then beheaded.

• Thomas: Apparently Thomas preached the gospel in Greece and India, where he angered local religious authorities, who martyred him by running him through with a spear.

• Matthew: According to legend, the former tax collector turned missionary was martyred in Ethiopia, where he was supposedly stabbed in the back by an swordsman sent by King Hertacus, after he criticized the king’s morals.

• James (son of Alphaeus, AKA James the Less): According to Foxe, James, who was elected by his fellow believers to head the churches of Jerusalem, was one of the longest-lived apostles, perhaps exceeded only by John. At the age of 94, he was beaten and stoned by persecutors, and then killed him by hitting him in the head with a club.

• Thaddaeus, AKA Lebbaeus, Judas or Jude: According to several stories, he was crucified at Edessa (the name of cities in both Turkey and Greece) in 72 AD.

• Simon the Canaanite AKA the Zealot: Simon preached in Mauritania on the west coast of Africa, and then went to England, where he was crucified in 74 AD.

• Judas Iscariot: According to Matthew 27:3-6, the treacherous apostle quickly felt remorse over his betrayal of Jesus and went to the Temple to recant. When the high priests ignored his plea, he threw down the 30 pieces of silver that he had been paid, and went off and hanged himself.  But Acts 1:15-20, gives a different and even grislier version of Judas’ demise. He says that Judas used the blood money to purchase a piece of land and then fell headlong from a high place there, so that “he burst asunder in the midst, and all his bowels gushed out.” Jerusalem residents subsequently named the place Aceldama, which means “the field of blood.”