Pro-Brexit MPs erupted in fury in Parliament today as the out-of-touch May regime issued its ‘Brexit’ White Paper full of proposals that aren’t Brexit at all. Their anger was increased by the farcical scenes caused by the government’s failure even to give MPs copies of the 98-page surrender note.

The report setting out the Government’s appeasement of Brussels would mean EU workers will still be allowed rights to travel to Britain temporarily.

Tourists, young people and business trips would also be allowed in without visas.

EU judges will get to advise a new joint committee of UK and EU officials tasked with resolving disputes after Brexit.

And it confirms the Prime Minister’s plan to have Britain follow EU rules on goods without any say on how they are drafted.

Brexiteer ringleader Jacob Rees-Mogg declared the plan ‘does not respect the referendum result’ while Tory MPs lined up to condemn the plans in Parliament.

Amid chaotic scenes, the Commons was briefly suspended as Brexit Secretary Dominic Raab tried to present the policy paper before it was given to MPs.

The plans have threatened to derail Theresa May’s Government since they were agreed by the Cabinet a week ago. Boris Johnson and David Davis resigned in protest, claiming that the plans betray the 2016 referendum vote.

EU negotiator Michel Barnier welcome the publication of the plans and said he looked forward to resuming negotiations next week after he had studied them. 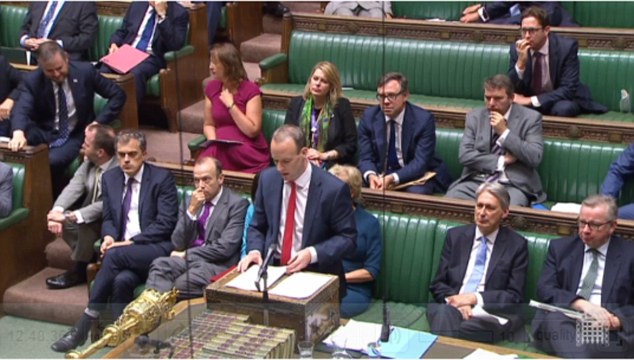 The plans published today would mean:

The plan envisages the creation of a new governing body of ministers from both sides – meeting twice a year, including one summit of the British PM with leaders of the remaining 27 member states and heads of EU institutions – to oversee the agreement and discuss proposals for change.

It paves the way for an association agreement, which is used by countries like Ukraine to oversee close ties with the EU.

What is in the fake Brexit blueprint?

Key features of the Future Framework plan include:

Brexiteers condemned the plan as not delivering on the referendum mandate.

Jacob Rees-Mogg said: ‘In particular, this paper sets out that the UK will be subject to EU laws while having no say in their creation.

‘The Common Rulebook will not be common it will be EU law, interpreted by the EU Court with the UK subjected to EU fines for non-compliance.

‘The UK has accepted it cannot diverge from ”ongoing harmonisation” without activating repercussions for Northern Ireland. In effect, Parliament will have no say over future EU laws implemented in the UK.

‘The UK has accepted that it will collect and hand over EU taxes. This is an unwarranted intrusion into the control of our border. The absence of reciprocity is concerning and the cost to the taxpayer unknown.

‘Taken as a whole, this recreates many of the worst aspects of the EU the British people voted to leave. This does not respect the referendum result.’

Brexiteer Sir Bill Cash, who chairs the Commons European Scrutiny Committee, raised concern that a “common rulebook” with the EU on certain produce would see the UK accepting regulations as it had done under the 1972 European Communities Act.