The life of a Serbian Patriot

The 17th  of June is the anniversary of the murder of the great Chetnik leader Draža Mihailović. Draža was executed by firing squad on this day 72 years ago by Tito’s communists.

He participated in the Balkan wars of the early 20th century, rising to the rank of lieutenant following the dawning of the 2nd Balkan war. He went on to serve during the First World War. He received numerous decorations for his bravery and service in defence of his people.

Following the invasion and occupation of Yugoslavia by the Axis forces in 1941, a small group of officers and soldiers led by Mihailović escaped in the hope of finding Serbian units still fighting in the mountains.

Mihailović and his followers identified themselves as the "Ravna Gora movement." The BBC called him the commander of the Yugoslav Army in the Fatherland, which became the official name of Mihailović's Chetniks.

He soon began taking successful military action against the Axis forces occupying Yugoslavia and a bounty was put of his head by German forces for the killing of four German officers. His units simultaneously fought against German troops and Pro-Soviet partisans led by Tito. His Chetnik units saved the lives of 500 US air-force personnel after they were downed by the German Luftwaffe in the skies of Yugoslavia. 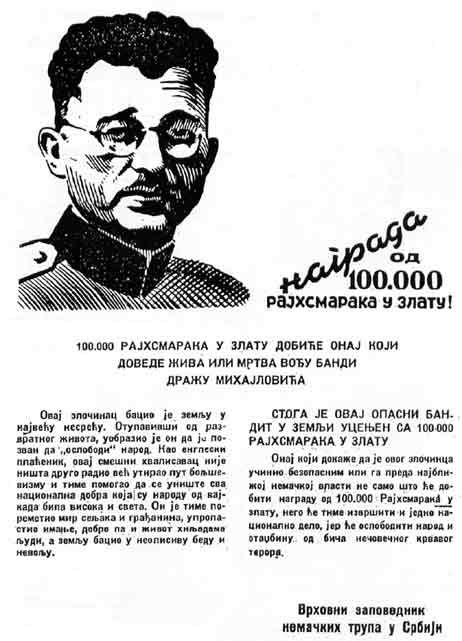 After the Axis defeat and the end of WW2, he was arrested by Communist forces and executed. The great wartime leader Winston Churchill Said of Mihailović: "those who have triumphantly withstood such strains may brand his [Mihailović's] name, but history, more discriminating, should not erase it from the scroll of Serbian patriots.”

In his final statement, Mihailović said: "I wanted much; I began much; but the gale of the world carried away me and my work." He was buried in secret by his murderers. His body has never been found.

In 2015, the Serbian High Court rehabilitated Draža Mihailović. This ruling reverses the judgement passed in 1946 by the Yugoslavian communist government, sentencing Mihailović to death for collaboration with the occupying Nazi forces and stripping him of all his rights as a citizen.