A society on the ‘precipice’ of disaster

A society on the ‘precipice’ of disaster

Satan is determined to undermine men, destroy their God-given roles, and re-define the biblical definition of manhood because he wants to see the family unravel and society crumble, Pastor Tony Evans has warned.

“So, if we want to unravel the family and society, the best way is to get rid of men fulfilling their roles.”

“What the enemy is doing is trying to get rid of the males psychologically, emotionally, and functionally, and that’s what culture is currently doing.”

Evans, who is also the founder and president of The Urban Alternative, pointed out that in the African-American community, for example, almost 70 percent of children are born to single mothers, meaning the majority of children are raised without a positive male influence in their lives.

The current chaplain of the NBA’s Dallas Mavericks explained that the reason behind the current attack on manhood is twofold: “First of all, men have failed to be the men that God wants them to be, which has opened up a gap which has been filled with a re-definition of manhood and attacks against men,” he said. “So, it’s in part due to men’s failure.”

“The other thing that is happening outside of the men themselves is the shift in culture which has created some of this re-definition and brought about men abandoning their roles, dumbing down their roles, and rejecting their roles. So, there is a toxic environment against manhood, but unfortunately, we’ve contributed to it,” he added.

Evans is the host of “Kingdom Men Rising,” a forthcoming theatrical event that seeks to help men understand the biblical definition of manhood and equip them to become who God created them to be.

The documentary film is an extension of two of his books, Kingdom Man and No More Excuses, and takes an in-depth look at the current state of manhood before examining what God requires of men.

Evans defined a “Kingdom man” as one who is “consistently operating under the rule of God in his life.”

“God can overrule him, because if God can never overrule him, then he can never become a biblical man,” he said. “So, what we want to do is show how that looks in his personal life, in his family, in his church life, and in his civic life within the spheres of God’s covenantal arrangement. We show what a difference it makes when he operates within those spheres.

“This is an opportunity to call men back to what God wanted for men when He created them,” he added.

The secular world, Evans posited, is confused about the true definition of manhood. Popular terms like “toxic masculinity,” he said, is society’s attempt to understand and define the present, poor state of manhood.

“There are two sides to this,” he explained. “One is people feeling that men have been oppressive to women, and to some degree, that’s true. It’s women wanting to break free from the toxic effect of that negative pressure.”

“But then on the other side is men having been given the wrong information about manhood from the television, from the media, from music, so that they’re doing the best that they know how to do,” he said. “So we’ve got to give them new knowledge and new definitions. We’re going to have to ask the opposite sex to encourage that right definition rather than throwing out the baby with the bathwater.”

While “Kingdom Men Rising” is aimed primarily toward men, Dr. Evans encouraged wives and mothers to attend to “reinforce” the principles presented in the film.

“The biggest thing a woman can say to a man is, ‘The more you’re like that, the more I want to submit to you,’ because now you’re feeding his ego. Ladies want their hearts stroked, and men want their heads stroked,” he said, adding that the term “submission” has been woefully misdefined.

“The same way Jesus had to submit to God the Father, every man has to submit to the Lordship of Jesus Christ,” he said. “So what he’s asking his wife, he should be modeling himself. The problem is, a lot of men who don’t submit want to demand submission, and that creates a problem.” 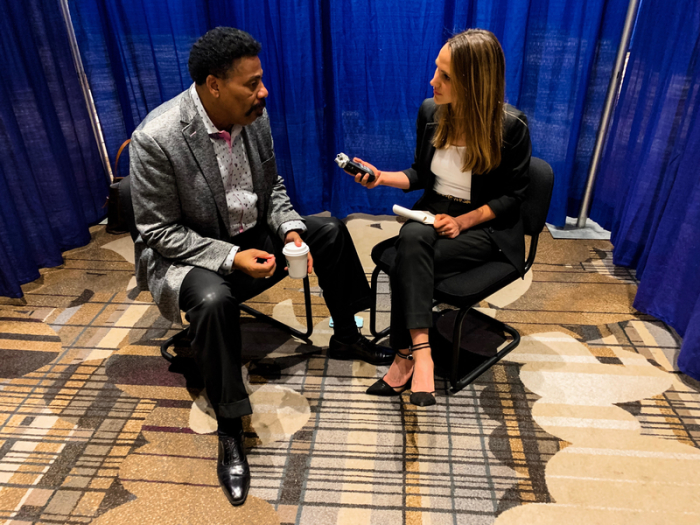 Evans told CP that until manhood is properly defined, culture cannot be saved. He encouraged men who understand the true definition of manhood to mentor other men, teaching them to become who God created them to be. He pointed to Acts 3, where Peter and John, two of Jesus’ disciples, healed a man who had been paralyzed since birth.

Later in the day, Evans was presented with the 2019 NRB Hall of Fame Award during the Closing Gala at Proclaim 19, the NRB International Christian Media Convention.

Every year, the award is presented to “an individual NRB member for invaluable contribution to the field of Christian communications, exhibition of the highest standards, and evidence of faithfulness in Christ.”

“It is with great joy that we induct Tony Evans to NRB’s Hall of Fame,” said Troy Miller, executive vice president and COO of NRB. “Evans has been a spiritual guide and father-figure for so many. And for so many years, he has proclaimed God’s Word faithfully, powerfully, and compellingly. Evans is an excellent example for us all.”

Presented by LifeWay Films and Tony Evans Films, in association with Fathom Events, “Kingdom Men Rising” is in movie theaters nationwide for two nights only — April 29-30. A companion Bible study, No More Excuses, will be released in May. For more information, visit KingdomMenRisingMovie.com.