When we we first shown this, we thought it must be the work of far-right trolls aiming to discredit the far-left by associating them with child molesters. But on checking it out, it seems that these twisted vermin are genuine!

A group calling themselves “Anti-Pedophobe Aktion” have for several years been trying to build a campaign to get pedophiles accepted as just another lifestyle choice, and to smear those of us who condemn pedophilia as ‘haters’. 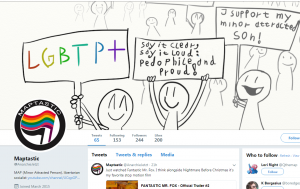 They are active on Twitter (see right), with posts of their own and retweeting the thoughts of pervert traitor Bradley Manning.

Note their addition of ‘P’ for pedophile to the letters LGBT. More cautious campaigners for the slow overthrow of normality have been trying to conceal their sympathy for pedophilia, bestiality, necrophilia and other unspeakable perversions by using the catch-all + sign.

They also have a YouTube account (above), although they appear to have removed whatever sick videos they posted when they started it.

In the About section on it, however, we can see their agenda:

That acronym MAP means “Minor Attracted Person” – the new liberal way to try to dodge the public hostility which quite rightly is now aroused by the word ‘pedophile’ (itself a PC way to avoid the older descriptive terms “child molester” or “sick bastard who deserves to be hung”).

That said, we should not be surprised that the far-left favour child sex. After all, the very basis of their cultural Marxist ideology is the idea that Christian morality is ‘reactioinary’ and has to be smashed in order to prepared the ground for revolution. That’s why groups such as the Socialist Workers Party support the legalisation of pedophilia by the abolition of the age of consent.

This leftist promotion of perversion is basically the brainchild of György Lukács, a Hungarian-based (but not Hungarian) Bolshevik who was deputy commissar for culture in the Béla Kun regime in Hungary in 1919. Lukács’ goal was openly and avowedly to eradicate Christianity and Christian morality from Hungarian society, and he believed that one of the most effective methods of achieving this would be to undermine sexual morality through the introduction of compulsory sex education in schools.

To achieve his aims, he introduced a radical programme in schools which included graphic literature being handed out to children, the promotion of promiscuity, the mocking of monogamy, and the scorning of their parents’ moral ethics.

The Béla Kun regime in Hungary lasted only six months, so György Lukács never got to see the rotten fruit of his plans. But unfortunately his ideas didn’t die with regime. Four years later he turned up in Frankfurt for a Marxist study week, where he shared his ideas amongst a fascinated group. One of the Marxists there, Felix Weil, was so taken with Lukács’ ideas that he used the fortune he had inherited to finance the Institute of Social research in Frankfurt – what became known as the Frankfurt School – incorporating many of Lukács’ ideas in its teaching.

The goal of the Institute was to translate Marxism from economic into cultural terms, since economic Marxism hadn’t had the success amongst the working classes that they had expected or hoped for. The reason for this lack of success, they surmised, was that the working classes had been contaminated with traditional bourgeois morals. So they set about breaking those morals through a number of means, including portraying traditional attitudes as “prejudice”, promoting androgyny, homosexuality and other perversions and by seeking to subvert the language through what we now know as “political correctness”.

Which, on reflection, is what should have told us that Antiphobic Aktion was not the work of trolls, but simply a ‘kite-flyer’ for the far-left’s next big assault on decency and Christian society – the attempt to normalise pedophilia. Because that was part of the long-term goal when they began their first, tentative propaganda about the need to halt the ‘repression’ of adult male homosexuality. It’s all part of the same plan!

Here’s a good video exposing some of the sick, self-serving lies of these far-left perverts.