According to a new Pew Research survey, of all Europeans, Ukrainians and Russians are the least tolerant towards homosexuality. Pictured above: Straight pride demonstrators in Kiev. 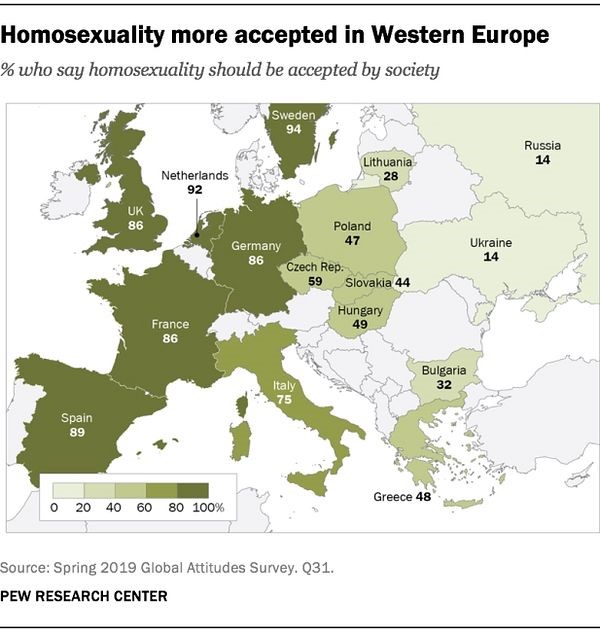 In the survey, “European Public Opinion Three Decades After the Fall of Communism,” Pew reports that only 14% of people from both Ukraine and Russia have a favourable attitude towards homosexuality.

The highest level of homophilia comes from Sweden, with 94%, followed closely by the Netherlands, with 92%. Germany, France, Spain, and the UK all polled in the 80s, with Italy at 75%.

The numbers are markedly lower in Central and Eastern Europe. Of the other solidly-Orthodox nations, 32% of Bulgarians and 48% of Greeks are accepting of homosexuality. In Lithuania—28%; Czech Republic—59%; Slovakia—44%; Hungary—49%; and Poland—47%.

For comparison, Pew notes that 72% of Americans today say homosexuality should be accepted by society—lower than the median of 86% in Western Europe, though much higher than the numbers in Central and Eastern Europe.

In the former Russian satellite of Georgia, this is how locals reacted to a Soros-funded ‘gay pride’ demonstration…..