Big Brother Policing Gets Worse by The Day!

Big Brother Policing Gets Worse by The Day!

Politically correct policing is no joke – it’s yet another worrying assault on freedom in Britain, and other countries are heading down the same dangerous road. Here are just a few of the latest shocking examples:

IN LIFE OR IN DEATH, TRANS WOMEN ARE NOT WOMEN, NO MATTER HOW MANY TIMES YOU SAY IT’S SO. IT’S SIMPLY IMPOSSIBLE TO CHANGE YOUR SEX.

Common sense to me and you, but not to one over-sensitive Suffolk plod who, in an early morning phone call to the author of the statement – 74-year-old blogger Margaret Nelson – demanded that she remove or tone down some of her posts.

‘WE NEED TO CHECK YOUR THINKING’

In January this year, plant and machinery dealer Harry Miller was questioned by Humberside Police for retweeting a poem mocking ‘transgenderism’, even though he didn’t write the poem himself.

The retweet was recorded as a ‘hate incident’.

If you’re one of those people who lies awake at night worrying about canine racism, fear not: the following genuine entriesfrom police ‘hate incident’ logs show they’re on top of the problem:

‘An unknown dog has fouled outside of victim address and victim perceived this to be a racial incident.’

When an Asian man drew a doodle of his friend and joked that it made him look like a terrorist, someone else who saw the drawing reported it to police.

After questioning the ‘suspect’, the police recorded a ‘non-crime hate incident’ and ordered him to write an apology letter to the ‘victim’ (who had in fact enjoyed the joke).

Last year, Liverpool teenager Chelsea Russell was convicted for posting rap lyrics on Instagram in tribute to a local boy killed in a car accident.

The lyrics – by US rapper Snap Dogg – included the ‘n’-word, and one ‘grossly offended’ policewoman decided to make a case of it.

Ms Russell was found guilty of sending an offensive message, electronically tagged, put on an 8-week curfew, and ordered to pay £500 costs plus an £85 ‘victim surcharge’ – even though there was no victim!

After reading aloud the story of Adam and Eve to a gay man, evangelist Gordon Larmour was arrested and locked up for ‘threatening or abusive behaviour, aggravated by prejudice relating to sexual orientation’.

THE POLICE DIDN’T LISTEN TO ME. THEY TOOK THE YOUNG HOMOSEXUAL GUY’S SIDE STRAIGHT AWAY AND READ ME MY RIGHTS… PREACHING FROM THE BIBLE IS NOT A CRIME.

As they handcuffed the man and grabbed his bible, he pleaded, ‘Don’t take my Bible away’ – to which one officer replied: ‘You should’ve thought about that before being racist.’

When he’s a Muslim policeman, evidently.

High-ups in the Metropolitan Police are so scared of being called Islamophobic they’re disregarding extremism among minority officers.

Sergeant Javaria Saeed resigned from her counter-terrorism role in the Met after her complaints about fellow Muslim officers’ racism and Islamic fundamentalism were ignored.

MY EXPERIENCES WERE THAT IT WAS MUSLIM OFFICERS… HOLDING RACIST VIEWS AGAINST WHITE OFFICERS… IF SUCH VIEWS WERE HELD AND EXPRESSED BY WHITE OFFICERS, THEY WOULD BE FIRED. 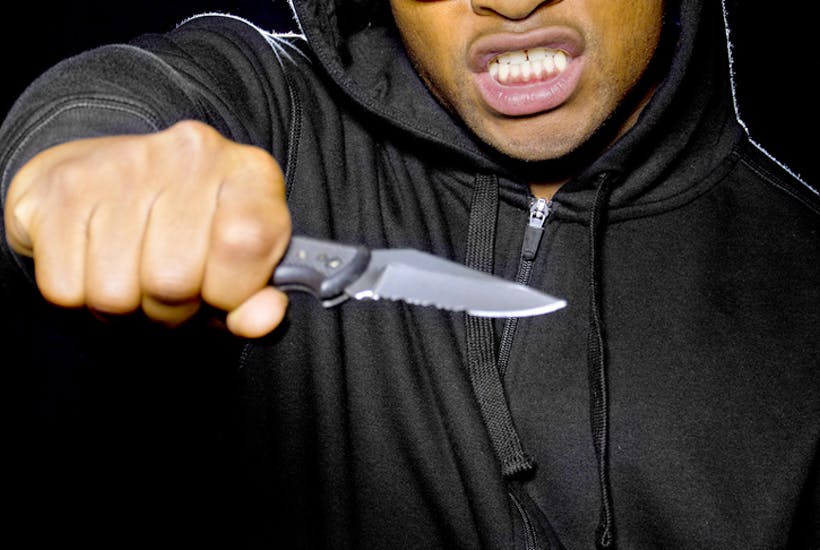 What to do about heavy-handed, PC policing?

Perhaps we should take a leaf out of Margaret Nelson’s book. Following her early morning Big Brother call from Suffolk Police, she told The Spectator:

It’s time to tell bullying police to shove their politically correct nonsense and get on with fighting real crime!