After more than a decade of the liberal elite calling chemtrails a ‘conspiracy theory’, no less an elitist than Bill Gates has just calmly announced plans to use chemtrails to change the entire planet’s climate!

The plan sounds like science fiction — but could be fact within a decade; every day more than 800 giant aircraft would lift millions of tonnes of chalk dust to a height of 12 miles above the Earth’s surface and then sprinkle the lot high around the stratosphere.

In theory, the airborne dust would create a gigantic sunshade, reflecting some of the Sun’s rays and heat back into space, dimming those that get through and so protecting Earth from  ‘climate warming’

The project is being funded by billionaire and Microsoft founder Bill Gates and pioneered by scientists at Harvard University.

Indeed, the plans are so well advanced that the initial ‘sky-clouding‘ experiments are said to have begun “months ago”.

About ten years ago, people started noticing shockingly fast aircraft moving at higher-than-normal altitudes and leaving these “trails” from horizon to horizon that formed grid patterns.

They observed what happened to these “trails” as hours passed and began thinking that they were being sprayed with something and shared their thoughts about it online. 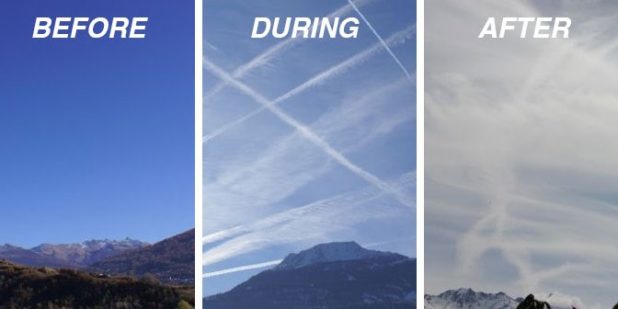 Due to how these “chemtrails” behaved and formed artificial clouds, one of the theories back then was that they were used to block sunlight in some kind of climate manipulation scheme related to global warming.

Now there’s public talk by authorities about doing exactly what was discussed in this “conspiracy theory” about a decade ago.

One of the Harvard team’s directors, Lizzie Burns, admits: ‘Our idea is terrifying… But so is climate change.’ An advisory panel of independent experts is to assess all the possible risks associated with it.

But creating what amounts to a gigantic sunshade for the Earth may come at a high price, posing even greater risks than climate change itself.

One fear is that spreading dust into the stratosphere may damage the ozone layer that protects us from hazardous ultraviolet radiation which can damage human DNA and cause cancers.

Climatologists are also concerned that such tinkering could unintentionally disrupt the circulation of ocean currents that regulate our weather.

This itself could unleash a global outbreak of extreme climatic events that might devastate farmland, wipe out entire species and foster disease epidemics.

The potential for disaster does not even end there. Trying to dim the Sun’s rays would likely create climate winners and losers.

Scientists may be able to set the perfect climatic conditions for farmers in America’s vast Midwest, but at the same time this setting might wreak drought havoc across Africa.

For it is not possible to change the temperature in one part of the world and not disturb the rest. Everything in the world’s climate is interconnected.

Furthermore, any change in global average temperature would in turn change the way in which heat is distributed around the globe, with some places warming more than others.

This, in turn, would affect rain levels. Heat drives the water cycle — in which water evaporates, forms clouds and drops as rain. Any heat alteration would cause an accompanying shift in rainfall patterns. But how and where exactly?

It all sounds pretty scary. Surely no-one would have the arrogance to play God with the whole world’s climate? There again, surely no-one in the ‘elite’ with the power to do such things would decide that there are too many humans on the planet and set about ‘population reduction’ on a global scale?

There again, if that’s what the Powers that Shouldn’t Be wanted to do, how better to go about it that wrecking the climate in a “well-intended experiment that went wrong” and so starving most of the ‘human herd’ to death?